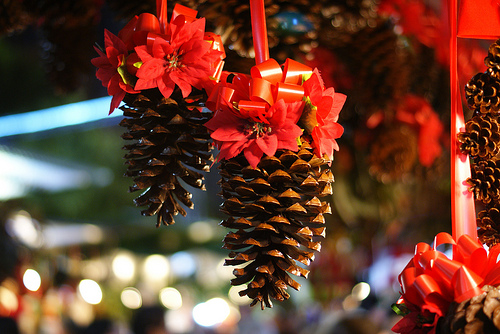 The Best Christmas Fairs in Barcelona 2015

At Christmas there are many things to do in Barcelona. The streets of the city are beautifully lit up with lovely lights put up for Christmas and there are many traditions celebrated over the festive season. Make sure that you go for a wander through the colourful and bustling Christmas Markets in Barcelona where you can find some original gift ideas or get what you need to eat or decorate the house. These are the most important ones:

Santa Llúcia Christmas Market is one of the most popular in Barcelona. This year it will be celebrating its 229th anniversary. In addition to everything you need for your own nativity scene (figures, houses, farmyards, lights and the traditional cagners, etc….), in its more than 270 stalls you will find zambombas (drums), tambourines, fir trees, handcrafted items and typical Christmas food.

Activities: From the 6rd to the 22th of December, they will be celebrating Tió Gegant (Giant Log Day). On December the 13th (Santa Llúcia) they celebrate the Day of Christmas traditions and customs in Catalonia thus, there will be choir singing, street bands, Christmas stories and many other activities. Where: Av. Catedral i Plaça Nova. When: 28th of November until 23rd of December 2015.

It was first set up in the 60s due to the lack of space in the Santa Llúcia Christmas Market however, over the years it has become one of the most important in Barcelona. With views of the Sagrada Familia nativity façade, you will find everything you need in the more than 200 stalls, including figures for the nativity scene, caga tios (Christmas logs), moss, garlands, Christmas decorations, sweet treats, handcrafted goods and other perfect gift ideas.

Activities: Painting competitions and children’s workshops are organised. In addition, from the 21th to the 22th of December, from 5pm to 7pm children can hand in their letters to Santa. Where: Plaça de la Sagrada Familia. When: 28th of November until the 23nd of December 2015.

Have a great Christmas in Barcelona!