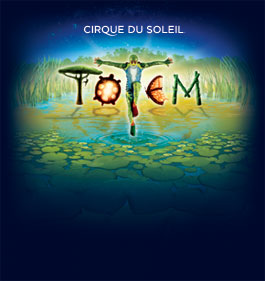 If you’re lucky enough to be in London this January then you should be very excited as Cirque du Soleil, comprising a dramatic mix of circus arts and street entertainment has arrived in the British capital with their Totem tour, and the show will be opening on the 5th of January until the 17th of February 2011. In honour of this special occasion the Royal Albert Hall in London has once again been transformed into a sumptuous big top for the entertainment of locals and visitors alike.

This world famous circus will be stopping off in London for an entire fabulous month for you all circus fans out there, and as mentioned previously will be performing in the converted Royal Albert Hall.

The theme for this tour is the journey into the evolution of mankind, and in the words of the show itself “TOTEM traces the fascinating journey of the human species from its original amphibian state to its ultimate desire to fly. The characters evolve on a stage evoking a giant turtle, the symbol of origin for many ancient civilizations.

Inspired by many founding myths, TOTEM illustrates, through a visual and acrobatic language, the evolutionary progress of species.

Somewhere between science and legend TOTEM explores the ties that bind Man to other species, his dreams and his infinite potential”.

Spectators will be dazzled by the stunning costumes and fabulous feats carried out by the talented artists who will entertain the audience with an array of different performances including acrobatics on bars, the hoops dancer, unicycles and bowls, devil sticks, the fixed trapeze duo, perches, and foot juggling, amongst other acts.

On some occasions it’s not cheap as prices range from 20 to 195 pounds a ticket, however there are concessions for children, students, and seniors so everyone gets a chance to go.

So, if you would like to be in the crowd of what are always spectacular performances from a very talented cast then check out their website for more details on the show and to see what you can expect when you go.

Found this interesting? Take a look at the Cirque du Soleil’s spectacles in…
Posted in Art and Museums in London, London
Laura