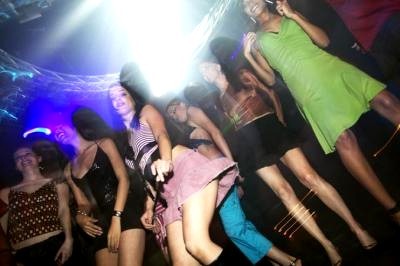 The Best Clubs in Valencia

Whilst the famous ruta de bakalao, a Spanish clubbing movement originating in Valencia and similar to the Madchester movement of the 80s -90s, may have passed into the annals of history it has left an enduring legacy in Valencia, some of the best clubs in Spain and people who love to party in them. If this has piqued your curiosity and you want to see for yourself the legacy of the ruta del bakalao then head to some of these clubs in Valencia.

Barraca- One of the original clubs on the ruta del bakalao circuit, today it hosts top national and international DJs playing a mix of electro, house and techno which attracts a mixed crowd of young clubbers and older clubbers nostalgic for the old raving days. Located right on the beach for an early morning swim after partying the night away in one of the best clubs in Valencia. Where: Les Palmeres When: 1230am- 9am Admission: 12€-20€

L’umbracle/ Mya- Located in the middle of Valencia’s City of Arts and Sciences this club is the perfect place to spend a warm summer night partying on the huge outdoor terrace to the sounds of house and electro. The crowd at this club can be described in one word, elegant. Where: Avenida del Saler, 5. When: 12am- 6am Admission: 10€

La Soirée (Sala Deseo 54)-The original and best gay club in Valencia, fills with people from all walks of life looking to party the night away listening to great music in a fantastic atmosphere. Featuring some of Spain’s best DJs and drag shows this club won’t disappoint. Where: Calle Pepita, 15. When: 6pm-6am Admission: 10€-12€

On the Rocks-This club in Valencia with its modern interior and large windows offering spectacular views of the City of Arts draws in a well to do crowd looking to party the night away to the sounds of Deep House. Where: Paseo Alameda, 45 When: 12am-4am Admission: 10€-12€

Wah-Wah Club-If you are looking for an alternative to electronic and dance music then this club in Valencia is for you. Featuring live bands weekly and DJs playing Indie and alternative music this is a great place for laid back drinks with friends listening to live music in a welcoming atmosphere. Where: Campoamor 52-54. When: 9pm-3pm Admission: 5€-15€.