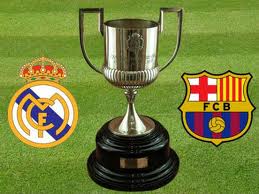 Arch rivals Real Madrid and Barcelona to face each other over two legs in the Spanish Copa del Rey (King’s Cup). The first leg will be played in Real Madrid’s Santiago Bernabéu Stadium Wednesday 30th of January and current “la Liga” leaders and Copa del Rey title holders Barcelona will host the return leg on Wednesday 27th of February in Camp Nou.

Barcelona, 15 points clear of Madrid in la Liga will be full of confidence when they take on Madrid in the first leg of the semi-final of the Copa del Rey 2013 . Messi, Xavi and Iniesta are enjoying excellent from at the moment and Barcelona’s passing game will pose real problems for a Real Madrid missing so many players in their defensive line.

The semi-final of the Copa del Rey 2013 will also provide the perfect opportunity to see the world’s two best players come up against each other Real Madrid’s Cristiano Ronaldo and Barcelona’s, four time Golden Ball winner, Lionel Messi. The quality of both players cannot be doubted but which one of them will be the decisive factor in the first semi-final of the Copa del Rey?

Why not find out for yourself by experiencing the excitement and emotion of the Copa del Rey live from the stands of the Santiago Bernabéu, and while you’re at it you can explore the Spanish capital of Madrid. From the tapas bars to the museums Madrid has a lot to offer not forgetting the world famous Madrid nightlife, sure to keep you partying into the early hours of the morning regardless of the result of the semi-final of the Copa del Rey 2013.

If you are looking for accommodation for the Copa del Rey semi-final between Real Madrid and Barcelona check out some of our apartments located in Chamartín close to the Santiago Bernabéu Stadium.