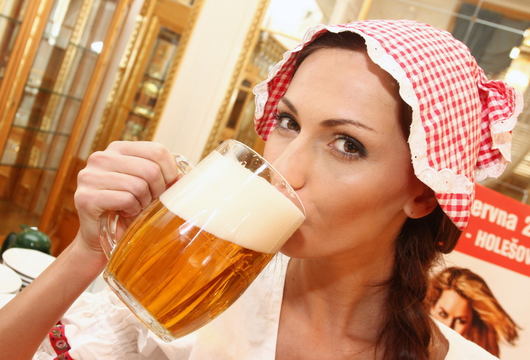 Beer in the Czech Republic is omnipresent. Not forgetting that the Czech Republic consumes the most beer per capita in the world and is also one of the world’s major beer producers. Pilsner Urquell, Budweiser Budvar, Gambrinus, Kozel, Krusovice and Staropramen are brands of Czech Beer appreciated the world over.

During the festival various marquees with capacity for 10,000 people are erected. Barmen and women dressed in the Czech national costume serve typical Czech dishes such as roast goose, goulash and grilled meats all prepared by famous restaurants and catering companies. There is live music everyday featuring a range of genres from punk, rock, metal, folk to pop, hip-hop and reggae and on the weekend this carries on until the early hours. But let’s have a look at what this festival is all about, Beer.

The festival has its own currency, the "beer Tolar", which is equivalent to €1,70. This currency is used to buy beer, food and souvenirs…So that you have an idea of the prices, for two tolars you can buy a “tuplák” which is one litre of beer.

If you are thinking of attending the festival during the weekend, we recommend you reserve your seats in one of the marquees in advance, the festival gets very busy on the weekends. You can make your reservation here.

The Czech Beer Festival 2014 will take place in Prague from the 15th of May to the 30th of May at the Exhibition Centre Prague Holesovice. If you needed a good excuse to visit Prague in the spring there you have it. Na Zdraví!