Dali’s Universe on the Costa Brava 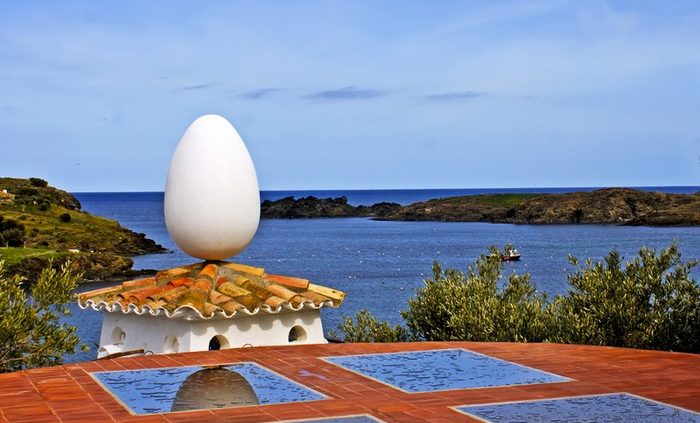 The Dali Triangle on the Costa Brava

Many people are drawn to the Costa Brava by its enticing beaches and environmentally friendly urban development that respects the area’s natural beauty. But that’s not the Costa Brava’s only attraction, though. This is also the birthplace of Salvador Dalí, who left his mark on several towns in Empordà. We’ve put together a route covering the main places on the Costa Brava where this great artist let his imagination run wild. The three points of the Dalí Triangle are the Dalí Theatre Museum in Figueres, the Dalí House Museum in Portlligat and Gala and Dali’s Castle in Púbol.

The Dalí Theatre Museum is in Figueres, Dalí’s birthplace. The museum is given over to this Catalan genius in full and is run by the Gala-Dalí Foundation.

Salvador Dalí drew up the plans for the museum himself, to be housed in an old theatre that had been destroyed in the Spanish civil war. Inside it is divided into different spaces with weird and wonderful combinations of paintings, sculptures, furniture and many other curiosities that sprang from Dalí’s mind. The most famous installations include the Mae West Room and the Rainy Taxi.

In addition to the surrealist decor and the many artworks left by the artist, downstairs there is a small room with Dalí’s tomb.
In summer you can also visit the Dalí Museum at night.

Salvador Dalí’s house in Portlligat, near Cadaqués, is another must for getting an insight into the painter’s artistic universe. He spent much of his childhood and youth around Cadaqués and this house is where he lived until the death of his wife and muse, Gala, in 1982.

The Dalí House Museum in Portlligat is actually a series of fishermen’s huts that Dalí renovated to set up his house and studio. The mazelike interior twists into a series of spaces on different levels linked by narrow corridors and dead ends. No two rooms are the same size or share the same entrance. They are furnished with the painter’s furniture, sculptures and personal objects. You can visit his studio, library, bedroom and other private rooms, as well as the pool and garden.

Gala and Dali’s Castle in Púbol

Púbol, a small town near Figueres, is home to a small 11th-century castle that Dalí bought for Gala to keep his promise that she would one day be queen of a castle. He spent his final years here. It has been open to the public since 1996.

Dalí kept the castle’s exterior unchanged but completely renovated the interior, creating beautiful spaces such as the piano room and turning the old kitchen into a bathroom. Besides the art collection and private rooms, the castle is also home to Gala’s collection of haute couture outfits, the gardens with elephant statues and the crypt where Gala is buried.

This triangular route around the Costa Brava is ideal for enjoying the area’s art, cuisine and other gems. Tickets for the Dalí Theatre Museum in Figueres and other spaces managed by the Gala-Dalí Foundation can be bought online here.