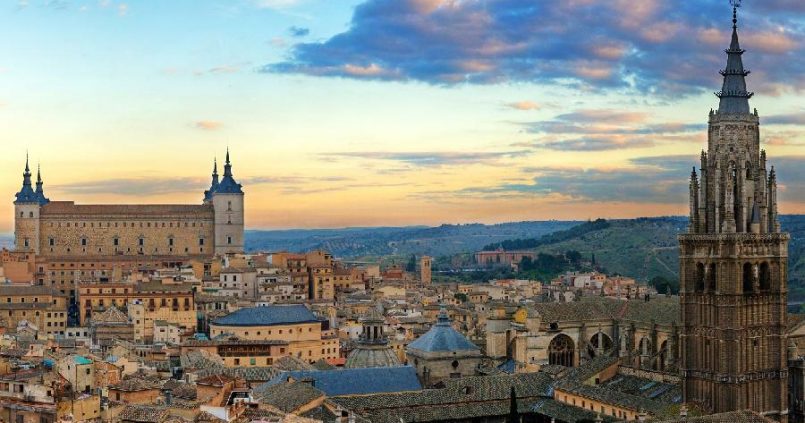 There is no shortage of things to see and do in the city of Madrid but if at any stage it becomes too small or you simply want to get out of the city and explore the surrounding area we have a few alternatives. In fact we have not one but three different day trips from Madrid to enjoy with the family, alone or with friends. You won’t regret it. Known as the ‘City of Three Cultures’ from when Jews, Christians and Muslims lived peacefully for centuries within the city’s walls, today Toledo is like an open air museum. In the winding streets of Toledo’s old quarter you can find magnificent monuments such as the Cathedral of Saint Mary of Toledo, el Transito Synagogue, Monasterio de San Juan de los Reyes and the Alcazar. You can’t leave Toledo without having tried the Roast Lamb, a regional specialty, in one of the city’s restaurants. Souvenir collectors have a great choice of select shops selling swords and intricately decorated objects.

Getting There: The easiest way to get to Toledo from Madrid is on the high speed train departing from Atocha Station. Journey time is approximately half an hour. Another option is by bus from Plaza Elíptica, journey time one hour. Another recommendable day trip from Madrid is to Segovia. Aside from the famous 1st century Roman aqueduct , this Spanish city conserves numerous churches and medieval buildings like Cas de los Picos. The spectacular Alcázar de Segovia presiding over the city from the crest of a small hill and full of secret passages and history is a must see. When in Segovia there is only one thing on the menu, suckling pig accompanied with a good red wine and finished off with ponche segoviano for dessert.

The more than 2.5km of imposing stone walls encompass the city like a great stone collar is the city of Ávila’s greatest monument. More than 100 defensive towers are evenly spread along what are the best preserved medieval walls in all Europe. Behind the walls you’ll find a very interesting old quarter full of churches, palaces and other ancient buildings. Start with a walk around the walls and contemplate the city from above, lose yourself in the maze of streets and when the hunger pangs hit find a restaurant and enjoy a delicious Avila steak and finish off the meal with the famously sweet yemas de Santa Teresa.

Getting There: Trains link Chamartin Station in Madrid with Avila with the journey taking a little over an hour and a half. There is also a bus link which leaves from Estacio Sur-Mandez Arevalo.

Other interesting day trips from Madrid are to Aranjuez, el Escorial, la Granja San Ildefonso and Alcala de Henares. We’ll leave those for another day.