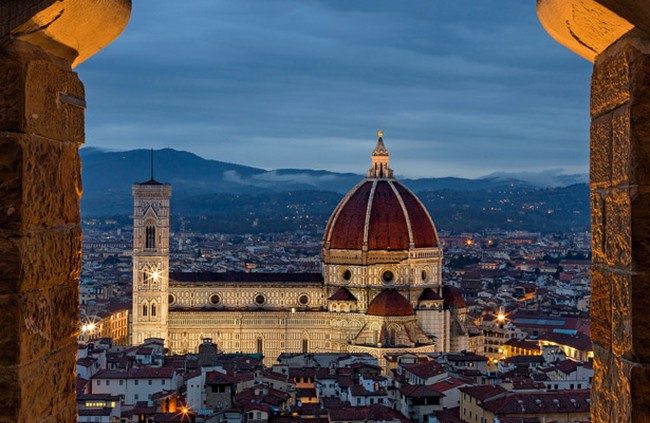 Don’t miss the Duomo in Florence!

The huge dome of Florence Cathedral is one of the most characteristic features of the Tuscan capital’s skyline. So it’s high time we said a few words about it in our blog. The Piazza del Duomo is the religious heart of Florence. It is home to the Cathedral of Santa Maria del Fiore, the Baptistery of San Giovanni and Giotto’s Bell Tower.

Work on Florence Cathedral got under way in the late 13th century on the remains of the old Cathedral of Santa Reparata, which was demolished to make way for a bigger church to house the growing congregation.

The original design was by Arnolfo di Cambio and building work continued on and off for 170 years.The main façade was completely undecorated for almost 300 years. The spectacular exterior, with walls in white, green and pink marble, is in stark contrast to the austere, almost entirely undecorated interior, which some visitors may find something of a disappointment. Brunelleschi’s dome is one of the largest works of the Italian Renaissance. And here large means huge. Not only because of its architectural beauty and innovative design (Brunelleschi designed a new system for the dome to support itself during construction) but also because of its size. It is 114 m high and 46 m in diameter and weighs 37 tonnes. More than four million bricks were used to cover it.

If you’re fit and have a head for heights, you can go up the dome of the Duomo and see the frescos of the Final Judgement by Giorgio Vasari and Federico Zuccaro up close. There are also stunning panoramic views over the city. Another star of the Piazza del Duomo in Florence is the Baptistery of San Giovanni. This octagonal building is one of the oldest constructions in the city and originally bore no relation to the cathedral. It is famed for its bronze doors on the northern, eastern and southern faces. Michelangelo called the eastern ones, by Lorenzo Ghiberti, the “Gates of Paradise”.

Finally, Giotto’s Bell Tower is an 84 m high, quadrangular tower decorated in marble with medallions, bas-reliefs and sculptures. This bell tower is in a rather strange position, right in front of the church—probably to leave room for the dome. You can also go up the tower to get a view over Florence.

Bear in mind that almost all the sculptures and decorations on the Bell Tower and Baptistery and inside the Cathedral are copies; you can see the originals in the Museo dell’Opera del Duomo.