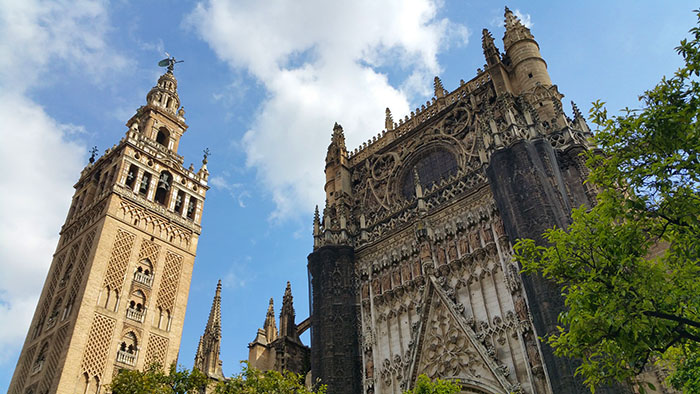 The biggest Gothic cathedral in the world

If you’re wondering what to see in Seville, make sure you don’t miss its cathedral. Declared a World Heritage Site by Unesco in 1987 together with the Real Alcázar and the General Archive of the Indies, today Seville cathedral remains one of the most popular and admired buildings in the city. Let’s take a closer look!

A brief history of Seville cathedral

Work on the Catedral de Santa María de la Sede de Sevilla began around 1401, on the site formerly occupied by the Aljama mosque. The only parts of the mosque remaining are the famous Patio de los Naranjos and the minaret, popularly known as La Giralda. The cathedral was symbolically finished in 1506, although work continued uninterrupted over the centuries.

The keys to any tour of Seville cathedral

A tour of Seville cathedral takes some time: it has 5 naves, 25 chapels and works by famous Spanish painters, so you are best to take your time and savour each and every artistic detail. If you’re a bit pressed for time, however, this brief guide should come in handy!

La Giralda: the 104 m high bell tower is one of the city’s most visible and emblematic sights. Built following the model of the minaret of the Kutubia mosque in Marrakesh, it lost the copper sphere that crowned it following an earthquake in 1365. It was replaced by a statue representing Faith, a figure known today as “El Giraldillo”. The views from La Giralda are the best in Seville, so make the most of them and take plenty of photos to show off back home!

Patio de los Naranjos: a breath of fresh air on your tour of the cathedral. We love the aroma of its orange trees and their welcome shade on hot days. In addition, the galleries around the patio hide more than one surprise. Look up at the ceiling nearest La Giralda and you’ll see a crocodile and an elephant’s tusk… Legend has it that they came from the Nile in the 13th century as gifts from the Sultan of Egypt to King Alfonso X to ask for the hand of his daughter Berenguela. Although he didn’t accept the proposal, he kept the gifts, and the crocodile and a tame giraffe lived in the Alcázar gardens. If you want to know more about the legends of Seville, check out this article.

Capilla Mayor: the altarpiece in this chapel is one of the greatest works in the history of art! It blows you away as a whole and, in particular, look out for the small 13th-century picture of the cathedral’s patron saint, the Virgin Mary.

Capilla de San Antonio: art lovers will be keen to know that you can admire “Saint Anthony’s Vision”, a masterpiece by Murillo and “The Baptism of Christ”, also by Murillo.

Tomb of Christopher Columbus: the remains of the discover of America have lain in Seville cathedral since 1899. They came from Havana after Spain lost Cuba in 1898. Look carefully at the inscription on his pedestal: “When the island of Cuba went its own way from Mother Spain, Seville obtained Christopher Columbus’s remains and the City Council erected this pedestal.”

Colombina Library: located in the northeast corner of the Patio de los Naranjos, this library is home to treasures such as the original “Book of Prophesies” written in 1504 by Columbus, and the incunable of Antonio de Nebrija’s “Spanish Grammar”.

Want some more ideas about what to visit in Seville? Read our article on the top 13 ideas on what to do in Seville.

Posted in Seville, Things to do in Seville
Marketing Team