Discover the Horta Labyrinth in Barcelona, the secret garden 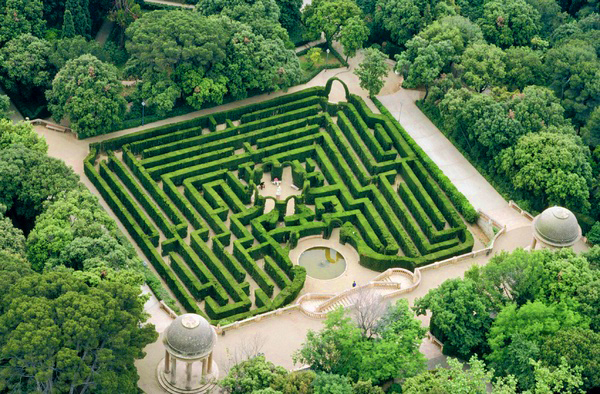 The Horta Labyrinth, one of the best kept secrets in Barcelona

The Horta Labyrinth in Barcelona is quite easily one of the most charming gardens in the city and one of the very few that have a hedge maze. It comprises the oldest historical garden in the Catalan capital. A rarity that is definitely worth a visit and a place which tourists usually don’t know about. The Horta Labyrinth is quite difficult to just stumble upon as it is situated on the outskirts of the city beside the small university campus of Mundet. On Wednesday and Sunday you can visit it for free.

The Horta Labyrinth, located in the Horta-Guinardó district, is situated in a former residence of the Desvalls family, where even today, the old palace with its neo-gothic and neo-Arab décor is found at the entrance. The Subirana Tower can also be found within the complex, an old medieval defence tower.

The park, extending over 9.1 hectares, is divided into two parts, a neo-classical

garden and a romantic garden. You will find sculptures on every corner, some of them with references to Greek mythology and others with a rustic décor, as well as a large number of fountains and ponds.

The romantic garden resides in the shade of some large trees and has a series of flowerbeds containing plants, herbs, flowers and ornamental shrubs. There is a cascade on the north side of this section. Only a few of the remains from the original design are left. It seems however that the romantic garden was built around the theme of death, indicated by the presence of the old medieval graveyard that now doesn’t exist.

The neo-classical garden on the other hand, is believed to be a tribute to love, which comes as no surprise given that throughout the garden, you will find cypresses and marble statues related to the theme including the sculpture of Eros, located at the centre of the labyrinth, amongst the most impressive. There are also the statues of Theseus which according to Greek mythology defeated the Minotaur, Ariadne who helped him out of the labyrinth, Artemis, Apollo’s twin sister and Dánae, the mother of Perseus, amongst others, located in the gardens. Up the stairs is another pavilion dedicated to the nine muses, topped with a sculpture representing art and beauty. Behind the building there is a large pond with water supplied by the fountain of the nymph Egeria who, according to legend, dissolved into tears following the death of Numa Pompilio, to form a fountain.

The Horta Park Labyrinth is a fascinating place where you can spend a quiet and pleasant time in the company of your loved ones, surrounded by nature and by magnificent artworks.

Map of the Horta Labyrinth Park in Barcelona

14: Fountain of the nymph Egeria

17: False graveyard and hermitage of the monk