Discover the Latin Quarter in Paris 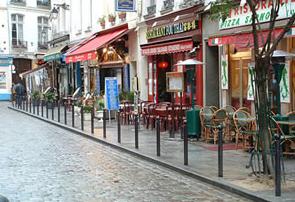 Located between districtsV and VI and occupying the left bank of the River Seine, the Paris Latin Quarter sits directly in front of the Île de la Cité, where the Notre Dame cathedral can be found. One of the oldest parts of Paris, it is said the name originates from when students lived in the district during the Middle Ages and who used Latin to communicate. The Latin Quarter of Paris is also well known for the important role it played during the student’s protests and strikes, especially during May 1968. More recently it has appeared in the Woody Allen film “Midnight in Paris”.

These are some of the more memorable sights in the Latin Quarter. Sorbonne University- Originating in the 12th century, the university offers courses in humanities and social sciences.

Saint Michel Square- From the square you can enjoy fantastic views of the Île de la Cité, plus there is a monumental 18th century fountain depicting Saint Michel fighting the devil. Odeon Theatre-Built in the neoclassic style, it was opened towards the end of the 18th century. Mozart’s “The Marriage of Figaro” was first performed there. Luxembourg Palace and Gardens- This Baroque palace is the headquarters of the French Senate. The gardens surrounding the palace are replete with sculptures, a decorative pond and various children’s playgrounds.

Arènes de Lutèce- Although it mostly goes unnoticed, behind 40 La Rue Monge is a Gallo-Roman amphitheatre dating back to the 1st century. Cluny Museum- It is Paris’ Middle Age museum and contains many important pieces among them the tapestry “The Lady and the Unicorn”.

St. Sulpice Church- One of the most prominent churches in the Latin Quarter. There is a column inside which acts a sundial and measures the equinoxes.

Jardin des Plantes- An interesting botanic garden well worth visiting in spring when the roses are flowering.

Other points of interest in the Latin Quarterif you have more time are the Paris Mosque, Open Air sculpture Museum, the Liceo Louis de Grand, Sant Genoveva Library or the Roman churches Saint Julien le Pauvre and Saint Severin.

If you need to top up your energy levels during your tour, you are spoilt for choice in the Latin Quarter. From the typical Parisian Bistro offering home style cooking to Michelin star rated restaurants like La Tour d’Argent or cheap eats offering Mexican, Moroccan or Argentinean.

In the Latin Quarter you can also find traditional literary cafes full of history where in times gone by figures such as Picasso, Sartre and Simone de Beauvoir met. Two of the best are Café de Flore and Café Les Deux Magots.

And when you have finished your tour of Paris’ Latin Quarter, remember to tell us what you liked most!