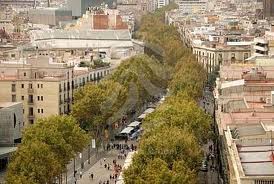 La Rambla is the most famous street in central Barcelona and is well known for its living statues, street artists and pickpockets. The street connects the Plaza Catalunya with the Christopher Columbus monument at Port Vell. Most of the people walking on La Rambla are tourists, as locals try to avoid it. Besides the boulevard, La Rambla consists of a narrow road for cars on both sides.

Even though accessible by car, the best way to explore La Rambla is by foot. One of the best and worst attractions of Barcelona can be found here. Prominent on the street are the living statues that can be photographed once given money. Due to the huge crowds on the boulevard, walking can take longer than usual. The best way to explore the 1.5 km long street is to take your time and enjoy the attractions.

Many shops can be found on and aside La Rambla. Fast food chains go side to side with book stores and tapasbars, while on the boulevard flower stands and animal sellers can be admired. Be shore to keep your wallet in a safe place since the busy parts are ideal for pickpockets. Restaurants on La Rambla are most of the time expensive and the quality of the food is disappointing. When you are searching for a nice restaurant, explore one of the side streets where the restaurants and bars will be cheaper and the food will get better.

Besides the artists on the street there are also other amazing things to see on La Rambla. A place worth visiting is the Open Air Market. Fresh fish, meat and vegetables are stalled here. Lots of local products are available and the fresh fruit shakes are delicious.

Another attraction is the Del Liceu Theatre, just aside the Liceu metro stop. This historical theatre was opened in 1847 and was originally funded by private shareholders. The theatre was destroyed during a fire in 1994 but opened its doors after a renovation in 1999.

The Wax Museum is located at the end of La Ramblas on the Passatge de la Banca 7. Housed in a neo-classical building and was opened in 1973. The museum is not very big but some nice characters are represented such as Cleopatra, Dali, Mother Teresa and Diana. The museum is a nice place to visit with children.

Most tourists just walk straight over the beautiful Mosaic made by Joan Miró. This colourful mosaic dates from 1976 and can be found at the Rambla Sint Joseph part.

At the lowest end of La Rambla, near the sea, is standing the Christopher Columbus Monument. Erected in 1888 the statue is designed by Rafael Ataché and shows Columbus pointing at the New World. The statue is 40 meters high and is not to be missed.

Discover and enjoy La Rambla and stay in one of our comfortable apartments. Click here! to see them.

The Top Vegetarian Restaurants in Madrid