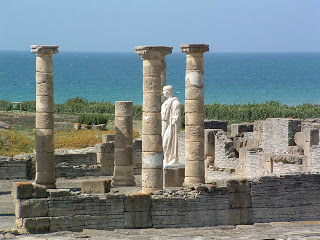 Baelo Claudia, an ancient Roman city surrounded by spectacular counrtyside overlooks Bolonia Beach only a few kilometres from Tarifa. For many years it remained hidden and forgotten beneath the shifting sand dunes, until excavations began at the beginning of the 20th century.

Despite the years of erosion, the ruins of Baelo Claudia remain in excellent condition. It is one of the best examples of Roman town planning to be seen today and is a great place for a day trip if you need a break from the surf, tapas and swimming in the sea. During the summer months, concerts, workshops for families and children, guided sunset walks and other activities are usually take place at Baelo Claudia.

The history of Baelo Claudia began in the 2nd century BC, when the Romans began building on the remains of an ancient Phoenician enclave. Baelo Claudia was a prosperous city, conceived form the very beginning as great commercial port. It didn’t take long for Baelo Claudia to become famous for its fishing industry and salted preserves. From here the much appreciated “garum”, a fermented fish sauce made from the intestines of small fish, was exported to the rest of the Roman Empire. Baelo Claudia was built following the classic Roman plan and was surrounded by a circular defensive wall with four main entrances. At the centre of the town, perpendicular to the sea, was the Forum, the Roman Baths and all the administrative buildings. Wandering the ruins of Baelo Claudia various temples, the market, the garum factory, houses, the basilica, the necropolis and various other buildings invite you to travel back in time.

Baelo Claudia was finally abandoned in the 7th century, after being in decline for various centuries, but the beauty and archaeological value remain in the ruins beside the sea.

Price: Entry is free to all European Citizens. Entry for visitors from outside the EU is 1.50€

GettingThere: Baelo Claudia is the Ensenada de Bolonia off the N-340 between Cadiz and Malaga.