Discovering Barcelona on a Vermouth Tour 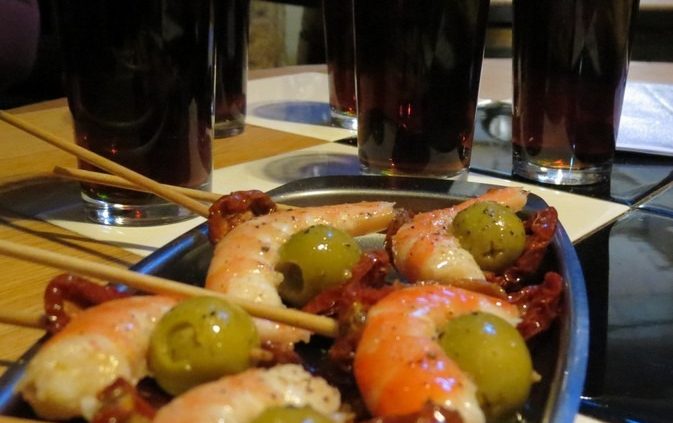 A Vermouth Tour of Poble Sec and Sant Antoni

There is a new craze sweeping Barcelona. The only thing is, it’s not new. A drink, which was until recently banished to the top shelf to gather dust has quickly regained the prominence it enjoyed in the past. Vermouth or vermut as it is known in Catalan is back and looks set to stay. It is more than a drink it is a ritual and you’ll often hear “Fem un vermut”, which put simply is to enjoy a glass of vermouth and some tapas in the company of good friends.

The vermouth and Barcelona share a long and fascinating history, especially in the neighborhoods of Poble Sec and Sant Antoni. Our tour starts at Paral • lel, a street known in Barcelona for its theaters and where vermouth is experiencing a resurgence. We go to our first stop on the vermouth route, Celler Cal Marino. This welcoming bar, housed in an old soda factory has quickly become one of the most popular vermuterias in Poble Sec. The first thing you’ll notice upon entering are the barrels filled with wine and vermouth, walls lined with bottles of wine from all over Spain, an amazing selection of tapas and the ever welcoming smile of the bar’s owner, Edu. Over a chilled glass of vermouth from the Priorat region we discussed the finer points of this aromatic drink and learnt about the magnificent “Cafe Torino, el Palau de Vermut” which stood at the corner of Psg. de Gracia and Gran Via. Both the vermouth and the accompanying prawn, sundried tomato and olive skewers were delicious.

Continuing with the tour we made our way to Carrer Blai, a long pedestrian street lined with bars, here we stopped at Gran Bodega Salto. The principal attraction of this bar apart from the live music is the decoration. The entrance to the bar conserves much of the original fittings and barrels from when it was a general store complete with clanking old refrigerator, however when you step further into the bar the decoration changes radically, the walls are adorned with all kinds of decoration, reminiscent of the days of theatre and circus on the nearby Parallel.

The vermouth tour continued, meandering through the streets of Poble Sec and Sant Antoni flicking between the past and the present as we stepped in and out of old and new vermuterias. As the tour came to an end I couldn’t help but reflect that in an ever changing Barcelona it is good to know there are some traditions which have managed to resist this change. Fem un Vermut.