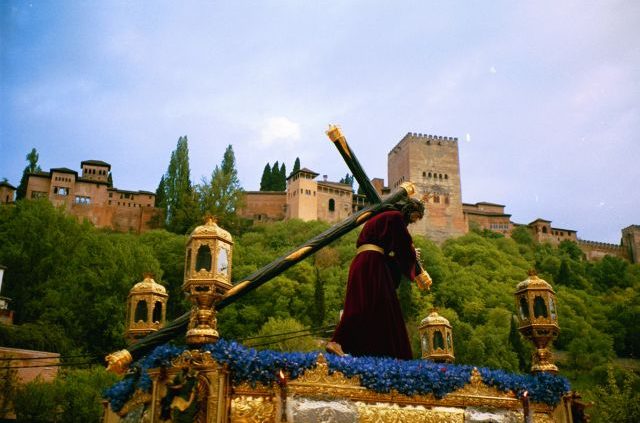 Easter in Granda, the Passion of Christ under the Gaze of the Alhambra

Holy Week in Granada is one of Spain’s most spectacular Easter celebrations. Just like in Seville, Malaga and other Andalusian cities, this religious celebration which attracts thousands of visitors is a very emotive and passionate affair. This year it takes place from the 9th to the 16th of April 2017.

Holy week in Granada has its own identity to which you have to add the incredible setting where the celebrations take place, under the watchful gaze of the Alhambra.

The importance of Holy Week in Granada originates from the Reconquista (Reconquest), an important period in Spanish history during which Spain slowly recovered territory occupied by the Moors.

The catholic religious circles were the ones who restored Christianity in the country and Holy Week has been reinforced as a symbol of Catholicism in Granada. From Palm Sunday to Easter Sunday the brotherhoods make their way through the streets of Granada carrying the ‘pasos’, religious icons of great value, on their shoulders. As in the rest of Andalusia, the ‘paso’ is accompanied by robed Nazarenos carrying crosses and candles, penitents and women dressed in black. What makes Easter in Granada different are the musicians and songs which mark the rhythm of the procession.

During the Semana Santa in Granada more than 60 processions take place but there are two which stand out from the rest. The first is Christ of the Gypsys, a very long procession on Ash Wednesday lasting around ten hours. The procession departs from the Cathedral of Granada and winds its way up through the narrow winding streets to Sacromonte. The procession pauses at various times for fires to be lit and mournful saetas sung.

The Silent Christ procession on Maundy Thursday in the Albaicin neighbourhood stands out for its beauty and solemnity. As the ‘paso’ passes the lights are turned off and silence falls upon the gathered crowd, the only sound is that of the drum marking the steps of the ‘paso’. It is without a doubt an incredible experience which will stay with you.

Easter in Granada is a celebration which is lived with a fervor, an emotion which entraps the outsider leaving an indelible mark.