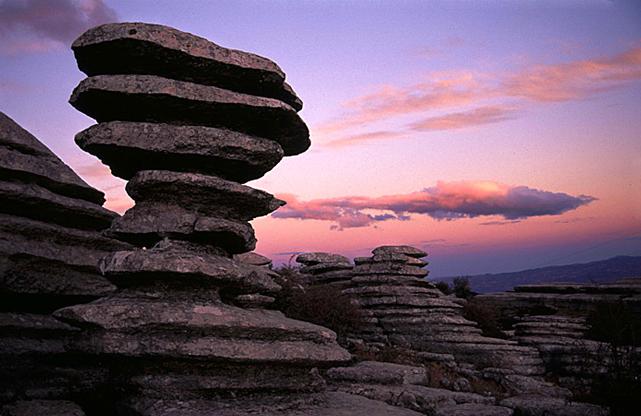 El Torcal de Antequera is one of those places that seem to have been taken straight from a science fiction film or alien planet. Its capricious and surreal limestone rock formations make it the perfect place for those who wish to get in touch with nature or escape from the beach for a while during a holiday in Malaga.

El Torcal de Antequera is one of the most impressive displays of karstic countryside to exist in all of Europe: a stone labyrinth, sculpted by water, wind and ice over 160 million years.

El Torcal de Antequera rose up from the sea floor during the Jurassic period, due to movement in tectonic plates. Since then, its potholes, caves and surprising layered columns, which look like layered plates or even, at times, animals, have stretched over 1,171 hectors.

This natural scenery invites your imagination to go wild. It also contains important prehistoric mineral deposits and a wide variety of flora and fauna. Especially striking are the “stone trees”, which grow in the crevices of the rocks, and different species of orchid. Animal life includes goats and mountain cats, as well as a large variety of poultry: falcons, eagles, griffon vultures, sparrow hawks and kestrels abound.

El Torcal de Antequera is ideal for putting on your hiking boots and going for a long ramble in Malaga. Currently, there are two marked trails, which are signposted in green and yellow. Both start and end at the same point: next to the carpark and the El Torcal Visitor’s Centre. Here, you can drink in views from the lookout point Las Ventanillas, where you can see the sea and the city of Malaga.

The green route is the shorter and the more popular. It goes 1.5 km up through the Torcal Alto and lasts around one hour. The yellow route, which runs over 3 km, is longer, although not that much more difficult. It can be completed in two hours.

The two routes allow you to see the main rock formations of El Torcal de Antequera, from mysterious natural corridors and sculptures that look like everyday objects: el Sombrerillo (the Hat), el Cáliz (the Chalice) and el Macetero (the Flowerpot) are some of the most popular.

El Torcal de Antequera has been declared a nacional point of interest. It can be found 12 km south of Antequera, and is only one hour from the Malagan capital, meaning that it’s a highly recommended visit for those looking to enjoy a day out in the countryside.