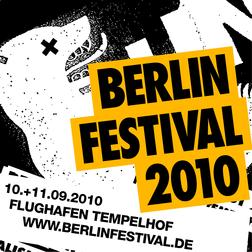 Berlin has settled as the European intellectual referent thanks to its intense nightlife, its numerous night-clubs, and pubs and because of its incomparable intellectual movement. However, among other things Berlin is very well-known for its electronic music scene, for its many DJs and places holding events around this music style. As such, this year is celebrated the fifth edition of the Berlin Festival 2010, an event gathering the top international bands and DJs from the electronic music scene. This festival is hold the 10th and 11 th September in the former Tempelhof airport, what makes this event even more attractive.

The line up is completed with bands and DJs such as Hot Chip, LCD Soundsystem, Boys Noize, Peaches, 2ManyDjs, Soulwax “Chilly Gonzales”, Adam Green or Blood Red Shoes and is expected to satisfy the most demanding music fans.

The performances are to be played in three different stages installed in the Tempelhof complex so that we can dance to the rhythm of the most innovative and current electronic music. If the advanced music festival in Barcelona, Sonar, was not enough for you, now you have the chance to enjoy the very latest music at this electronic music festival, with very affordable prices and carried out in such a great environment like the former Tempelhof airport.