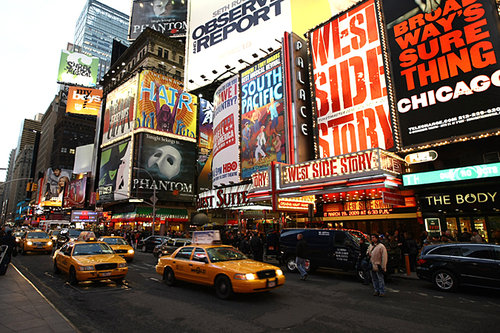 Everything you need to know about Broadway shows in New York

One of the most attractive things about New York is the glamorous Broadway shows. The dazzling musicals, the sights and sounds, the coloured lights, the enormous posters and the buzzing atmosphere.

Broadway, Times Square and the surrounding streets are the city opera and musical epicentres. The truth is that it’s very difficult to resist the magic of the Broadway musical and theatrical billboard, which has offered a wide variety of theatre and musicals for all tastes over the years.

Music and theatre productions in New York are divided into three categories, in particular in accordance with the location of the theatre and its audience capacity.

The productions “On Broadway” are the most famous. They are huge productions featuring famous actors held in the large theatres located nearby Broadway Avenue and Times Square. They are the most popular and glamorous musicals that are nominated for the Tony Awards every year. The Phantom of the Opera, Wicked, the Lion King, Mamma Mia and Billy Elliot are some of the impressive shows that you can see on Broadway.

“Off Broadway” they show less mainstream and cheaper productions in theatres a little further out of the more popular area. That doesn’t mean they are poorer quality or less recommendable. Famous musicals such as “Stomp” and “The Blue Man Group” have been presented on “Off Broadway”. If you are looking for non-musical theatre, you will also find them on stages in “Off Broadway”.

Finally there is “Off Off Broadway”. It is far out of the main area and you can enjoy alternative and experimental productions there.

You don’t usually have to buy tickets in advance to go to a Broadway show although it is recommended if you would like good seats. You can buy them in advance on the internet via diverse websites and collect them on the day of the show at the box office. Prices range between $50 and $200.

Alternatively, if you don’t mind what you see and you want to save a bit of money, then your best option is to buy tickets in the New York TKTS discount booths. You can buy unsold tickets in these booths at half the price or at major discount prices. The most popular TKTS booth is found at Times Square, however there are others situated on South Street Seaport (186 Front Street) and in Brooklyn (1 Metro Tech Center).

To fully enjoy New York, allow yourself to be seduced by the charm and grandeur of Broadway. Let the show begin!