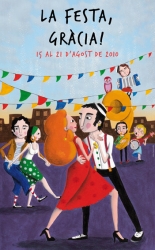 Like every year, during the month of August the district of Gracia in Barcelona is dressed up for its Festa Major (its popular party). This year the Feste de Gracia will be held from the 15th to 2th of August 2010 and its agenda will be marked by activities more focused on families, neighbours and kids. All in a commitment to recover the original spirit of the party.

This festival is very well-known for dressing the streets of Gracia with original decoration. This initiative is part of an old contest consisting on choosing the most colourful street and leads the neighbours during months to prepare the decor following different topics, such as the marine world, comics, or any other original idea.

During the day, the streets are filled with colours and children’s activities focused on families. Therefore, neighbours can enjoy popular lunches and dinners where they gather in harmony to enjoy the outcome of months of hard work for the district. However, in the evening, the streets of this typical district of Barcelona surrender to the youngest nightlife, with bars and stages spread across the streets of Gràcia, as well as concerts. This year the starring performances will be carried out by artists such as Maria del Mar Bonet and Sanjosex in the open enclosure of the Claustre de l’Oratori Sant Felip Neri.

All for you to enjoy a very popular festival, which this year will focus primarily on its most traditional side and enhances the daytime activities, but without leaving aside the nightlife activities.