Experience the passion with Holy Week in Granada 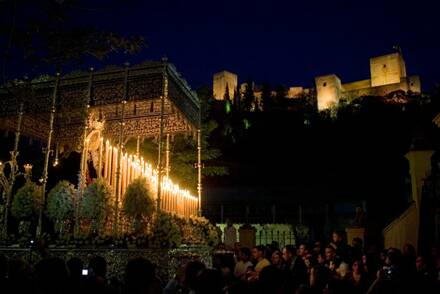 Holy Week is coming to Granada. Just like every year the capital of Granada grounds to a halt to make way for ongoing processions making their way through the city, as well as brotherhood members who march through the streets in religious fervour.&nbspHoly Week in Granada starts well before Maundy Thursday given that the major as well as the minor processions kick off on the Sunday before demonstrating their faith and devotion.

The importance of Holy Week in Granada originates from the Reconquista (Reconquest), an important period in Spanish history during which Spain slowly recovered territory occupied by the Moors. The catholic religious circles were the ones who restored Christianity in the country and Holy Week has been reinforced as a symbol of Catholicism in Granada. Thus, Palm Sunday marks the beginning of the religious festivities including the 8 days of the passion, death and resurrection of Christ. In the opening ceremony the Head Brother of the Santa Maria de la Alhambra Brotherhood will present the key to start this year’s stations of penance. At the end of the stations of penance on Holy Saturday, La Borriquilla Brotherhood returns the key to the Santa Maria de la Alhambra Brotherhood who stores it away for the following year.

On Holy Monday the Virgen de los Dolores procession makes it way from and to the San Pedro church. It is one of the most symbolic processions in Granada along the Acera del Darro (Darro walkway).

On Holy Tuesday processions from various brotherhoods and cofraternities make their way through the Albaicin district in Granada starting from the San Juan de los Reyes church to express their religious devotion.

On Holy Wednesday the most long-awaited procession by devout Christians is the El Cristo de los Gitanos. The streets of Granada dance with purple, red and gold during this moving procession which runs to Sacromonte led by the El Cristo del Consuelo and María Santísima del Sacromonte Brotherhoods.

A magical evening is promised on Maundy Thursday in the Albaicin district as the las tres Vírgenes del Barrio, la Concha, La Estrella and La Aurora processions meet, whilst the Cristo del Silencio procession keeps the spectators completely captivated with the drums, reflected in their respect and absolute silence.

On Good Friday one of the most typical Granada religious acts takes place. Families and neighbours gather on the Campo del Principe (main Square in the Realejo district) to pray with the city Archbishop and make three traditional requests. In the evening, figures from the former Inquisition appear dressed in feathers, and embroidered clothing leading a line of the Soledad de San Jerónimo Brotherhood members, the oldest of them all.

On Holy Saturday the Patron Saint of Granada, la Virgin de las Angustias (Virgin of Anguish) plays the lead role. She graces a silver throne that reproduces the Court of the Lions galleries and our Lord descending from the Cross. It is customary to follow the procession up to the Alhambra during a tiring but thrilling stretch.

All this and many more indescribable events will be taking place in Granada during Holy Week. Truly an experience that you should not miss out on in the city of the Alhambra.