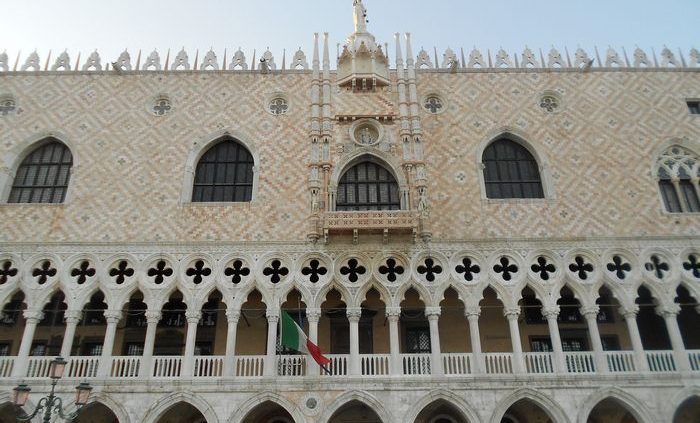 One the most immediately recognisable buildings in Venice is the Doge’s Palace. For almost seven centuries, this imposing palace was the residence of the Doge, the head of the Republic of Venice. From here he meted out justice, gaoled prisoners and governed Venice. Today it is a museum that shows us how the city was organised during its golden age.

The Doge’s Palace was built in the 10th century but has since been renovated and extended many times to create the spectacular building we see today.

Visit the Doge’s Palace in Venice

From the outside, the first thing we see are its columns and façade in shades of pink and white. Inside, in addition to the impressive architecture, we can see paintings by artists such as Titian, Tintoretto, Tiepolo, Hieronymus Bosch and Veronese.

During your tour of the Doge’s Palace you can visit the Doge’s lodgings, armoury, prison, courtyards, etc. The Doge’s personal apartments are on the first floor, but the most impressive rooms are on the second floor. The most important of all is the Council Chamber, where over a thousand people met to take the city’s political decisions. Here you can see the largest painting by Tintoretto: Il Paradiso.

Another interesting feature is La Bocca di Leone, a wall sculpture and secret post box where anyone could denounce any criminal activity by fellow citizens by posting a note here.

The Bridge of Sighs

During your tour, you’ll cross over the legendary 17th-century Bridge of Sighs. It is said that those sentenced to imprisonment got their last glimpse of Venice from the windows of this bridge and sighed in longing. The infamous Casanova is said to be the only prisoner to escape from the dungeons here by fleeing over the rooftops.

The Doge’s Palace is open every day from 8 am to 7 pm.
You need to buy a single ticket valid for the Doge’s Palace and the combined itinerary of Museo Correr, Museo Archeologico Nazionale and Monumental Rooms of the Biblioteca Nazionale Marciana. It costs €19 for adults, but children aged 6–14, students and pensioners pay €12. Admission is free for children aged 5 and under. The Secret Tour costs €20. You can buy tickets on the official website.