Explosion of the Cart ritual on Easter Sunday in Florence 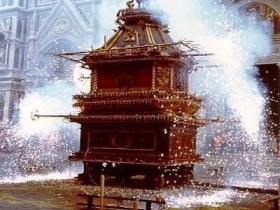 Explosion of the Cart in Florence

On Easter Sunday this year, and just like every year, Florence locals will be gathering in Duomo Square to watch a dove-shaped rocket, commonly known as the “Colombina” soar out of the square. This event, taking place on the 24th of April this year will ignite a huge wooden cart filled with explosives and fireworks in the process, thus causing the Explosion of the Cart.

It comprises the main folk festival of the year and dates back to the times of Pazzino de’ Pazzi, leader of the Florentine contingent of the first Crusade who was supposedly the first man to climb the walls of Jerusalem in 1099. He received two shards of stone from the Holy Sepulchre, which were subsequently used to start an annual “holy fire” to be transported through the city as a religious relic for all to see during Holy Week.

By the Middle Ages this holy flame came to be represented by a large candle, transported in a cart throughout the city, which has since then been transformed into a huge 30-feet-tall structure.

This longstanding festival has continued to be organised by his descendants and still bears a strong resemblance to its origins. The cart arrives in Piazza del Duomo pulled by two white oxen subsequent to it being lit in the Church of SS Apostoli. Then the archbishop lights the sacred rocket with the holy flame during the Easter Mass, which sets fire to the fireworks attached to the cart.

A complex but exciting ritual that if done properly will bring good luck to the city, its harvest, and the locals in their everyday life. So, there’s a bit of history for you! If you fancy attending this rather explosive event and you’re lucky enough to be in Florence this Easter, then head down to Duomo Square.

Practical information – Explosion of the Cart ritual in Florence

Name: Explosion of the Cart