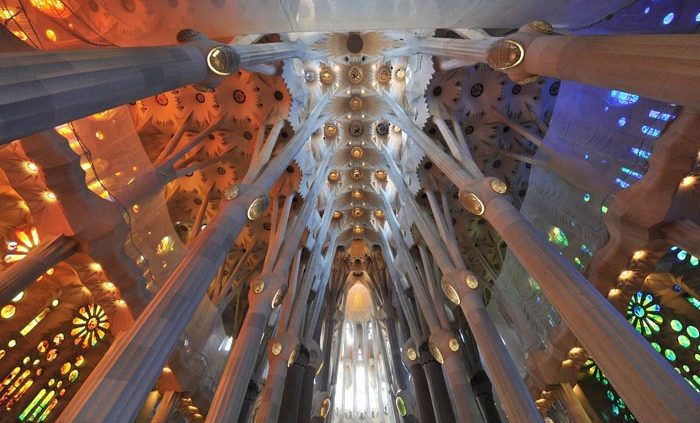 Find out all about this unique church!

If you’re on holiday in Barcelona you’re bound to come back with plenty of photos of the Sagrada Familia, but how many interesting facts, figures and secrets do you know about Gaudí’s Sagrada Familia? Keep reading to find out more.

History of the Sagrada Familia

Where did the idea of building it come from? Bookseller Josep Maria Bocabella, inspired by priest Josep Manyanet, had the original idea of building an expiatory church dedicated to the Holy Family in the centre of the new district in Barcelona. He paid 172,000 pesetas (€1,034) for the land and his original idea was to build a replica of the Basilica della Santa Casa, in Loreto, Italy. However, Francesc de Paula Villar, the architect originally appointed to the project, decided to build a neo-Gothic church there instead.

The first stone was laid by Francesc de Paula Villar on 19 March 1882, with Gaudí in attendance, since he had worked as Villar’s assistant on several projects. Little did he imagine that he would become the chief architect of this unique building. Villar left the project following a series of disagreements with the city council.

Antoni Gaudí was only 31 when he took over the project and completely revamped Villar’s original design. Gaudí’s design for the Sagrada Familia would occupy much of the rest of his life, and he even lived inside the building for the last 15 years of his life.

Gaudí died tragically on 10 June 1926, three days after being knocked down by a tram between Gran Via and Bailén streets on his way to confession at Sant Felip Neri church. He wasn’t carrying any identification and his dishevelled appearance meant he was mistaken at first for a beggar and received no first aid from drivers or passersby. He was buried in the Capilla del Carmen in the crypt of the Sagrada Familia, where his remains still rest today.

The Nativity Façade is the only one built during his lifetime. If you look carefully on your visit to the Sagrada Familia, you’ll see that the older stone on this façade is darker than the rest of the building.

During the Spanish Civil War, anarchists set fire to part of the Sagrada Familia, including the workshop where Gaudí had worked for many years. His sketches, drawings and models were destroyed, and current building work is partly based on reconstructed versions of Gaudí’s original plans.

Visit the Sagrada Familia and discover its fascinating facts and secrets

In 2016 the Sagrada Família welcomed 4,561,848 visitors from all over the world, who were amazed by its unique architecture and many fascinating facts and secrets.

As locals know only too well, work on the Sagrada Familia has been going on for over a hundred years. It was started in 1882 and won’t be completed until 2026 (the 100th anniversary of Gaudí’s death) at the earliest, meaning it will have taken 144 years, or almost one and a half centuries.

Once finished, the church will boast 18 towers. The 12 smallest ones will represent the 12 apostles; the four next tallest ones, the evangelists, with their respective symbols (angel, bull, lion and eagle); the next tallest, the Virgin Mary; and the tallest central tower, Jesus. At 172.5 metres this will be the tallest point of the Sagrada Familia. It is expected to reach this height in 2020, making the church the tallest building on the Barcelona skyline.

Interestingly, there isn’t a single straight line anywhere inside the church. Gaudí designed the Sagrada Familia to imitate the architecture of nature, so the columns inside rise up like trees, in accordance with mathematical calculations. He also held that curved lines are the lines of God, while straight lines of the lines of man.

Without a doubt, the greatest mystery surrounding the Sagrada Familia is Gaudí’s possible ties to the freemasonry. One of his main patrons was Eusebi Güell, a renowned mason, and two of his disciples were also members. The letterhead on his invoices featured the well-known masonic signs of a pair of compasses and a square. Here are some of the many other masonic symbols that can be found inside the Sagrada Familia:

We don’t know for sure whether Gaudí was a mason of not, but writer Apel·les Mestres says that from a certain point in his life, Antoni Gaudí would generally only accept religious projects and would only take on secular work after seeking permission from the Virgin of Montserrat.

In addition to the pelican, there are lots of other animals represented on the Sagrada Familia with strong ties to Christianity. Christ is represented by a lamb, and Evil appears in the form of various amphibians and reptiles (a snake with an apple, two tortoises and two chameleons). The Holy Spirit is portrayed as a dove.

Given its striking architectural beauty and intriguing mysteries, it’s no wonder that the Sagrada Familia is one of the top 20 sights in the world according to Lonely Planet. And British singer-songwriter Ed Sheeran even has a tattoo of it as a symbol of his love for Barcelona!

Now that you know a bit more, you’re almost certainly dying to visit this world-famous church for yourself. Check out full information on the Sagrada Familia, including ticket sales, prices, opening times, how to get there, and much more. We hope you enjoy your visit!