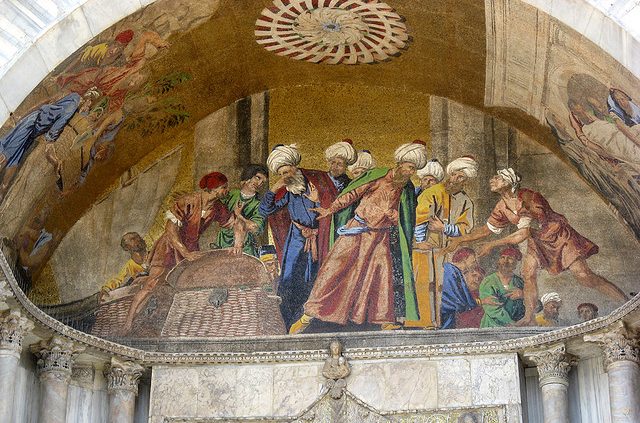 Tradition, Love and Gondola Races during the Festa di San Marco in Venice

The 25th of April is a special day in Venice. It is the day in which Venetians celebrate the Feast day of St Mark, a significant day in the calendar for most Venetians and Italians as it is also Liberation day. It is a day where the Patron Saint of Venice, St Mark is honoured with mass and a procession in the Basilica, a day when lovers declare their love for one another and of course no holiday in Venice would be complete without a gondola race. The gondola race on Saint Mark’s Day is from Sant Elena to Punta della Dogana this plus many more events including music, dancing, concerts and carnivals take place to celebrate the Festa di San Marco.

Another interesting tradition occurring on St Mark’s day is for the men of Venice to give their wives or lovers a “bocolo”, a red rose. It is the story of two lovers, Tancredi and Maria, Tancredi was a humble troubadour who loved Maria, the Doge’s daughter. Unfortunately his low social standing meant they would never be permitted to marry, Maria suggested Tancredi join the war against the Moors in Spain to prove himself to the Doge and elevate through brave deeds his social standing, thus enabling them to marry. Their dream ended when Tancredi fell mortally wounded on a rosebush, with his last remaining strength he plucked a rose from the bush and asked his friend Orlando to deliver the blood stained rose to his lover, Maria. Orlando kept his word and delivered the rose to Maria. The morning of the 25th of April only a day after receiving the rose Maria was found dead, the blood stained Rose across her heart. Since that day a rose is given to the women of Venice as an expression of everlasting love.

If you find yourself holidaying in Venice on April 25th, be sure to give the one you love a rose…