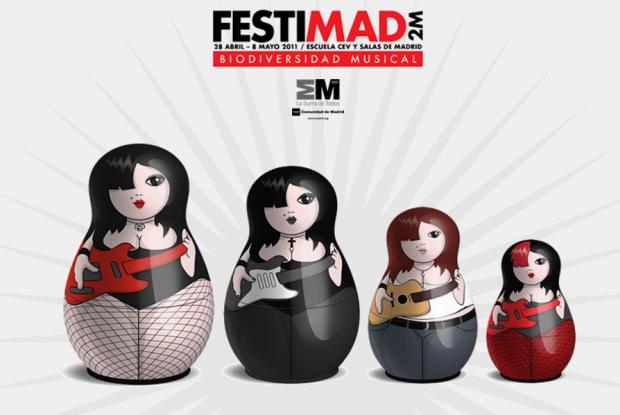 Madrid’s biggest rock festival, Festimad 2M, is taking place once again this year from the 28th of April to the 8th of May in various locations of the city. Featuring a wide variety of musical styles mainly rock, but also pop, alternative, metal, dance, funk, hardcore, and indie, amongst many others this event promises to be an exciting one.

Festimad 2M is organised by Creacción, a non-profit cultural organisation who are also responsible for organising other important events in the capital. Their aim is to bring a diversity of quality music to everyone minus all the usual publicity, as well as discover new talents, and attract new music followers.

Under the slogan “Musical Biodiversity”, Festimad 2M 2011 will be featuring the latest in independent, diverse, and quality music cultures. Plus, there will 70 concerts distributed over 3 stages with performances from 100s of artists of 15 different nationalities and from 11 different regions.

In addition, they will be celebrating the 2nd edition of the Madrid Premios Factoria Joven, which awards young people for their musical achievements. This is a way of discovering emerging new talents and the winners get to perform in the festival under the Festi Madtaste category.

The highlight of Festimad 2M has to be the new addition under the form of the Festimad Si Menor, which as part of the Festimad 2M, will be hosting 25 concerts in three spaces accessible to everyone but especially aimed at children and under 18s.

A great way of discovering and enjoying new music in the Spanish capital!