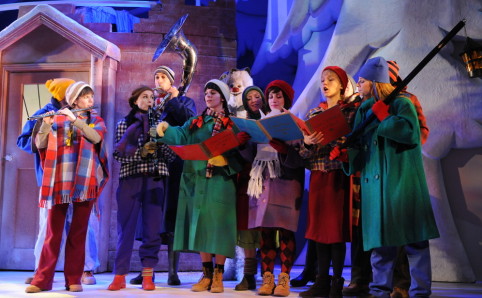 Festive theatre productions in London this 2010

London is looking very festive at the moment with all the Christmas lights illuminating the streets, all the decorations adorning the city, the snow occasionally settling on the buildings, and the array of seasonal events, activities, and fun festive things to do on the London agenda this season. However, if you feel like something Christmassy but fancy taking a break from the cold on the streets then we have just the thing for you. The theatre can be festive as well and this Christmas season there are lots on offer in the way of Christmas plays as well as alternative productions and shows, however given that tis’ the season and all that we thought that we would make a few suggestions in the way of plays about Santa and snow in keeping with the season. So, check out our humble suggestions for you to enjoy in the British capital this Christmas.

We all remember the classic “The Snowman” by Raymond Brigg’s. I know it takes us back to our childhood. Well, a dance adaptation of “The Snowman” is currently being shown in the Peacock Theatre in London, and has proven so far to be a raging success.
Performed by the Birmingham Repertory Theatre, this version of the classic story that was once voted one of the Greatest British Television Programmes, and relates the story of a little boy who builds a snowman which comes to life at the stroke of midnight on Christmas Day, and featuring the famous song “We’re walking in the air” by Peter Auty (St Paul’s Cathedral choirboy) is guaranteed to be an all round crowd pleaser.
There is a little bit for everyone during this entertaining show including a coconut, banana and a pineapple performing a limbo dance to the playful flicking on and off of a light switch, the conflict between Jack Frost and the irrepressibly jolly Father Christmas, some beautifully performed dance routines, and finally the orchestra’s alternately lively and moving evocation of the iconic score. A pleasant and nostalgic blast from the past for adults, and an entertaining adaptation of the wordless book, and silent film of Raymond Brigg’s “The Snowman” for children showing in the Peacock Theatre until the 9th of January 2011.

Showing in the Royal Court Theatre until January the 15th, 2011 this play relates the story of 10 year old Holly who hates Christmas as whatever is waiting for her under the Christmas tree is never her real dad. So she forms a plan to ambush Santa and enlists his help in finding her father. Santa turns out not to be like the jolly fat man we all expect, rather a more sullen version of Saint Nick and the little girl’s methods of persuading this festive figure are very unorthodox, and at times slightly violent involving chili powder, and superglue, in addition to near electrocution. Alarming you say? It only gets worse.
Hollie’s stepdad is a dog, complete with a waggly tail, and her cuddly teddy bear comes to life only to reveal himself as an evil Russian master criminal as opposed to your fluffy-minded companion. Intrigued? So were we. Anthony Neilson, creator of some of the most darkly thrilling theatre productions over the last two decades is the author of this rude and unpredictable play, with a crazy plot, and Christmas carols stuffed with sly jokes and cynicism. Not a production for everyone, but outstandingly inventive, a bit weird in some parts, and at times very funny. If this sounds like your kind of thing then check out the theatre website for more information, and to get tickets.

Showing in the National Theatre in London until the 13th of March 2011, Season’s Greetings includes a glitzy comic cast starring none other than Catherine Tate, British actor, writer, and comedian, as well as funny Katherine Parkinson, and Mark Gattis. Written by Alan Ayckbourn, this play has been described as a cracker of a production and hilariously funny, offering an entertaining look at the misery and high jinks of an average family Christmas.

Cheating at snakes and ladders, fighting over comic books, and infidelity under the Christmas tree, Christmas has arrived for the Bunker household and their family and friends. One to miss if you’re secretly dreading a family Christmas, but otherwise very funny. Neville and Belinda Bunker play host to a vile and hopeless array of guests, including an equally unhappily married couple, Neville’s alcoholic sister and her useless GP of a husband, in addition to many other interesting additions to the production. The explosive cherry on the comic cake has to be Neville’s uncle who wears a knife strapped to his calf and is giving all the kiddies guns for Christmas, a desperate wife trying to rouse her husband from a drunken stupor, and finally an unexpected death all adding to the profusion of emotional carnage, which will make you laugh regardless. For further information and tickets check out the National Theatre website.