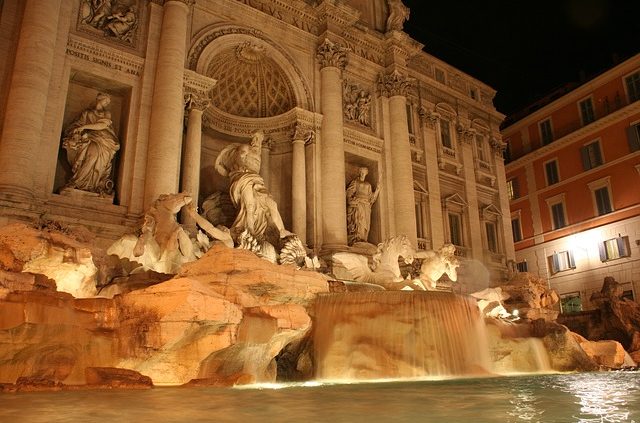 History and fascinating facts about the Trevi Fountain

English traveller and poet Percy B. Shelley said “the fountains are enough to justify a trip to Rome”. And he was right—the Italian capital is full of lovely fountains: La Fontana della Barcaccia, the Four Rivers Fountain in Piazza Navona, the Fountain of the Tritons… but none of them is as famous as the Trevi Fountain. Here are some interesting facts and figures about it.

The biggest fountain in Rome

Almost 20 metres wide and 26 metres high, the Trevi Fountain is the biggest fountain in Rome. However, it can also be the most difficult to find, hemmed in between the buildings on the small Piazza Trevi, which takes its name from the tre vie ‘three roads’ that meet there.

History of the Trevi Fountain

It dates back to 19 BC, when this fountain marked the end of the Aqua Virgo, an aqueduct that brought water from a spring some 20 km away from the city. At the height of the Roman Empire, it carried over 100,000 m3 a day!
The aqueduct had a basin from which inhabitants could take water, but the fountain only began to take shape during the Renaissance, under Pope Nicholas, although its current appearance is from the 18th century. It was designed by Nicola Salvi, working with sketches by Bernini, but he died before seeing it finished. He was succeeded by Giuseppe Pannini. The Trevi Fountain was opened in 1761.

This Baroque fountain represents Neptune, god of the sea, taming the waters. On the orders of Pope Urban VIII, it is built into the front of the Palazzo Poli. Originally it was to have been built on the other side of the square.

The legend of the Trevi Fountain

Legend has it that if you throw a coin into the Trevi Fountain, you’re bound to return to Rome. You should take the coin in your right hand, face with your back to the fountain and throw it over your left shoulder. If you throw two coins, you’ll find love as well; three will ensure marriage (or divorce, if you’re already married). Who knows if there’s any truth to it…

… and the three (thousand) coins

What is certain is that this custom nets about €1 million a year. Some days they’ve fished out up to €3,000 in a single day! If you’re wondering where all this money goes, you’ll be pleased to know that since 2007 it has been given to charitable organisations to help the needy. People do sometimes try to steal the coins from the fountain, though.

Bathing in the Trevi Fountain

One of the most legendary scenes in the history of film takes place in the Trevi Fountain, when Anita Ekberg leaps into the fountain and invites Marcello Mastroianni to join her, in La Dolce Vita. Well, she’s had her fair share of imitators over the years, with people jumping into the fountain, clothed or naked. Don’t do it! Bathing in the Trevi Fountain is forbidden and is said to be punishable with a €500 fine. You’re better cooling off with an ice cream!

The Trevi Fountain is one of the loveliest fountains in the world. Now you know all about it, make sure you check it out on your next trip to Rome.