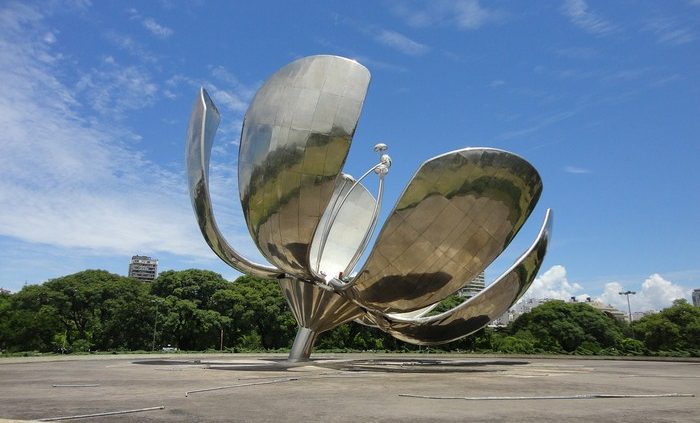 Argentina’s national flower might be the cockspur coral tree, but the most famous flower in Buenos Aires is the Floralis Generica: a 20 m high stainless steel flower that towers over the Plaza de las Naciones Unidas, also known as Plaza de la Flor. Its geometric shape stands out in the middle of a green area with winding paths, surrounded by woods.

Who made the Floralis Generica?

The Floralis Generica was designed and given to the city by Argentine architect Eduardo Catalano in 2002. Now one of the most famous sights in Buenos Aires, this giant metal sculpture is also a mechanical flower.

The Buenos Aires flower opens and closes its petals with the sun. According to Eduardo Catalano, this movement symbolises hope reborn every day. On four special days, the flower remains open all night: 25 May (May Revolution), 21 September (start of spring), 24 December (Christmas Eve) and 31 December (New Year’s Eve).

The idea for this sculpture came to Catalano one summer evening as he watched a hibiscus flower closing for the night. He decided to create a mechanical flower as a new icon for the city. In his own words: “Every city has its own urban symbol, but they’re all static; they never change their expression. They lack a voice to fill the city’s poetic silence. I hope this flower fills the poetic silence of Buenos Aires.”

How does the Floralis Generica work?

The Floralis Generica sculpture is made out of stainless steel, with an aluminium and concrete frame. It was built using reinforced aeronautical materials to withstand the wind and weather. Unfortunately, it was out of order for many years, and the mechanism was only fixed in summer 2015.

It weighs 18 tonnes and the open petals are 32 m in diameter. The six petals are moved by a hydraulic system controlled by photoelectric sensors that measure the intensity of the sun. They open every morning at 8 am and close at dusk, which varies throughout the year.

It is also fitted with a wind gauge that automatically closes the flower at wind speeds of over 40 km/h. It also closes if there’s a storm on the way.At night, when it is closed, it emits a red light from LEDs inside. There is also lighting for the petals and the lake that acts as a mirror beneath it.
If you go to Buenos Aires, don’t miss this amazing sculpture.