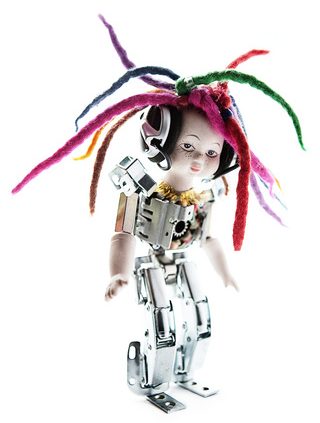 The holidays are approaching it would be interesting to take a look at what Barcelona has to offer in the way of art. The thing is that we have more time and given that it’s now quite cold we can just stop off in one of the many museums and art galleries filling the city. Thus, so as to cultivate our minds a little, we would like to suggest a couple of exhibitions and displays guaranteed to satisfy even the most curious and restless minds.

Free exhibitions in Barcelona this 2010

The 7th International Creative Recycling Festival of Catalonia is taking place in the CCCB from the 17th of December to the 9th of January 2011. This initiative is being promoted by the association Drap Art that promotes creative recycling by means of the organisation of festivals, exhibitions and workshops, and which has been doing so for 15 years now.

Just like the last edition, Drap-Art’10 will be developed in eight modalities to show us the possibilities of creative recycling: group exhibitions of art and designer objects made from recyclable materials, interventions in public space, a space for thought and discussion, the traditional art & design market, participative workshops, performances, audiovisuals and environmental cinema. Drap-Art’10 looks for a balance between the participation of national and international artists; between emerging and consolidated artists, the reason for which the festival will include the participation of invited artists, selected in collaboration with specialised organisations, galleries and independent curators. In addition, for the third year running, Drap-Art’10 will include once again the Residu’Art prize, awarded by the HERA group, in the categories “Emerging Artist” and “Professional Artist”.Thus, visitors can expect more than 150 projects by artists from all over the world demonstrating the creative potential of recycling.

Two different exhibitions are being shown in this art space at the same time. The first one refers to the "Catalysts. Art, Education, Territory" exhibition that will be open to the public from the 18th of December to the 3rd of April 2003. This is an exhibition showcasing art projects and participatory processes which are grounded in a direct relationship with a particular local context. Each of this set of proposals comprises three essential components, which combine with and relate to one another with varying degrees of interaction: they are artistic practices, they foment educational activities, and they take place in a specific spatial and temporal territory or context, while embodying a critical reflection on politics and society.

Alternatively, in the same building the exhibition “Think Art- Act Science” is being shown. It is an exhibition of projects by artists who have engaged in dialogue with scientists from a variety of disciplines. All of the artists taking part in the Swiss artists-in-labs programme have done a nine-month residency in a scientific research institute or a university science department.Think Art, Act Science explores the multiple dynamics of the collaborations that took place in the labs. The works on show reveal the communicative potential of the artists’ responses to scientific research — preconceived perceptions of science and art were the first to be dynamited. The artistic researches have been articulated around three main areas of investigation: ecology and the environment, spatial awareness and the emotions, and the new technologies. The exhibition project in Barcelona adds in a local component, with educational activities, discussion and research using methodologies that foster multidisciplinary creativity. The exhibition at Arts Santa Mònica marks the start of a tour that will take the project to other cities in Europe, America and Asia.

On a somewhat more frivolous note, but not necessarily less interesting, our final suggestions comprises that of the exhibition “Barcelona, alta costura” (haute couture), which from the 14th of December to the 31st of March 2011 will be showing more than 100 original outfits from the Spanish, and more specifically the Catalan Golden Age for the first time in Barcelona in Palau Robert, and after having made its successful way from the Museo de Traje in Madrid to other cities. The exhibition looks back over the so-called “Golden Age” of authentically Catalan fashion, during which time they dominated fashion from the 20`s on in Spain thanks to the hegemony of the Catalan textile industry and its direct connection with Paris. Thus, pieces from the Antonio de Montpalau collection with outfits from top figures of haut couture such as Jeanne Lanvin, Pedro Rodriguez, Manuel Pertegaz, Cristóbal Balenciaga, Carmen Mir, Asunción Bastida, Pedro Rovira, and Margarita Nuez, amongst others will be on show. This is therefore an extensive review of the history of Spanish fashion via haut couture that declined with the arrival of prêt-à-porter clothing at the start of 60’s, but during which period saw the emergence of name such as Andrés Andreu, Margarita Nuez, Josep Ferrer, and Roberto Dalmau.