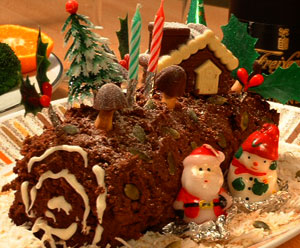 Have we convinced you that Paris is great? Are you planning a fabuleux festive season there and would like some tips on how they spend their Christmas? Be assured that for friends and family a gift from the French capital would be a novelty, and that’s where we come in with a few tips on what to get while you’re away and so you don’t go back ashamed and empty handed. In addition, here are a few tips on French traditions to make sure that you spend the most traditional Christmas in Paris.

Foie gras (fat liver) is a traditional and well-known delicacy in French cuisine comprising paté made from goose or duck’s liver that is described as rich and buttery. It is commonly eaten during the Reveillon (feast on Christmas Eve) in addition to other delicious French goodies. The bûche de noël (yule log) is also traditionally eaten at Christmas and is nothing other than a log-shaped cake made of chocolate and chestnuts representative of the special wood log burned from Christmas Eve to New Year’s Day in the Périgord, which is a holdover from a pagan Gaul celebration. French cheese is eaten all year round however, it is definitely worth a mention as it features in all French Christmas celebrations and the French variety is many and of very good quality. Finally, a tradition very unique to France en Provence is the treize desserts.

Following le gros souper (Christmas Dinner) on the 24th of December, are the famous and ritual treize desserts (13 desserts), representing Jesus Christ and the twelve apostles. There are always 13 desserts but the content varies sometimes according to the Province however, the essence is more or the less the same with dried fruits and nuts (walnuts, almonds, dates, raisins, etc.), fresh fruit (apples, pears, oranges, and grapes, etc), and sweets including cake like brioche, biscuits, candied citron, light thin waffles, cheeses, and black and white nougat symbolising good and evil, etc. All this and more delicious French cuisine is washed down with some luxurious and fine French Champagne, its name lent from the region where it is produced and needing no introduction. Some of things definitely would be a successful present to put on your Christmas shopping list given that they are traditional, typical, and tasty ideas.

Le Reveillon (Big Feast) is a large celebration and dinner following midnight mass on Christmas Eve, and more so than Christmas Day, which is usually a quiet affair that you spend with your family. Less and less people are actually attending mass now, or they eat before. In addition to the previously mentioned French sweets and treats, this feast consists of oysters, snails, seafood, smoked salmon, a chestnut stuffed turkey with mashed potato, goose, or some other roasted bird for the main course, as well as a selection of French cheeses, bûche de noël (yule log), or the treize desserts, washed down with some French Champagne or sparkling wine. Children then leave their shoes tucked under the tree or next to the fireplace filled with carrots for Father Christmas’s donkey in the hope that Père Noël (Father Christmas) will leave them presents, (usually something that fits in the shoes such as sweets, money, or small toys) for them to find in the morning.

New Year’s Eve and Day is a magical experience in Paris. The majority make their way to the big celebration on the Champs Elsyées which at the stroke at midnight features a huge and spectacular firework display expected of the French capital. It is very crowded but if you like a big party then this is the right option for you. Alternatively, you can head to the Sacré Coeur Cathedral in Montmartre where there is another party go on but it isn’t as crazy as the Champs Elysées, or finally you can see in the New Year with close friends and family with a private party. Either way, celebrating with some French Champagne, is a must. The great thing in France is that although some Champagnes are very expensive, you can buy some really good champagne and sparkling wine for really reasonable prices. Finally, a common Paris treat at the New Year are papillottes, chocolates, or other confections that pop like small firecrackers when you tear off the wrapping which you can buy in any confectioner or patisserie.

Similarly to Spain, the French celebrate the epiphany with Kings’ Cake however, unlike the Spanish they do not celebrate on the 6th of January but on the second Sunday of the month. The Galette des Rois, a cake made from puff pastry and frangipane (almond filling), is cut into pieces and distributed by a child known as le petit roi (little prince) or l’enfant soleil (sun child), hiding under the tablela fève (the charm hidden inside usually a porcelain figurine of a king or a bean) – is King or Queen for the day and is rewarded with a paper hat. The French again celebrate this special day with a big family meal in line with the big family tradition in France.