Friendly Rentals raised more than €2000 for Check In Solidario 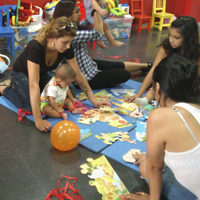 Money Raised will go to Helping Families in Need in Barcelona

Last week the Barcelona Tourist Apartment Association (Apartur) “Check In Solidario” campaign came to a close. An initiative Friendly Rentals proudly took part in and one which raised over €7400 and will go to helping families in need and at risk of exclusion in Barcelona. The Check In Solidario campaign was organised in conjunction with Casal dels Infants, a non-profit organisation with over 30 years experience fighting against poverty and marginalisation in Barcelona. The money raised during the campaign was presented to the Casal dels Infants at an official ceremony and will go towards the “Vincles” project. This project helps mothers with children under three who are at risk or vulnerable, beginning in the Raval neighbourhood of Barcelona it has extended to other municipalities in Catalonia.

It is initiatives such as this which allow tourist apartment rental companies to become more involved in the building of a better society, helping those in need and improving the lives and future of at risk children.