Friendly Stories: The 31st Wedding Anniversary of Robert and Mary 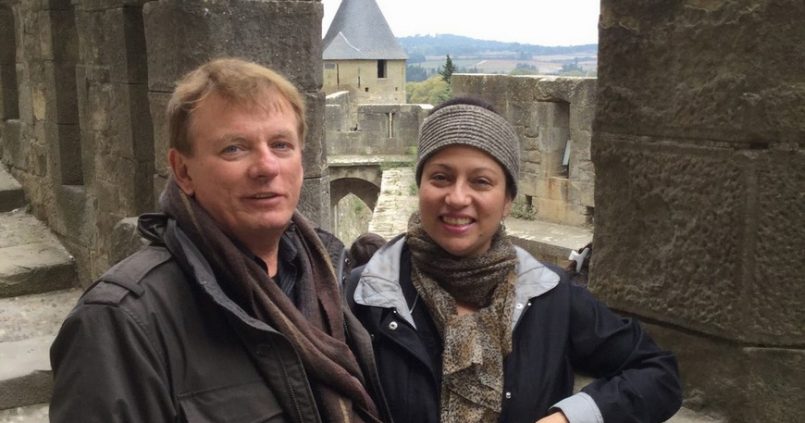 Robert and Mary are from suburban New York. Mary is a native New Yorker, Robert is originally from Detroit, Michigan. For their 31st wedding anniversary they planned a trip to Europe – to Barcelona and the south of France to be exact.

Though it was meant to be a romantic trip for just the two of them they decided to bring someone along: their adopted daughter Lola – an artificial three-toed sloth from the Bronx Zoo Gift Shop. She’s been a faithful travel companion ever since.

31st anniversary is an odd date to celebrate you might think. The idea was to take this trip on their 30th anniversary, but the sad and eventual passing of Mary’s mother respectfully delayed the trip for another year.

When we asked the couple what the purpose of their trip was (besides celebrating their love), Robert answered:

“To delve into and explore the art and culture of peoples we were not too familiar with…and to find out more about the exciting atmosphere we kept hearing and reading about relative to the Catalonian culture. We also wanted to visit medieval city sites in the south of France such as Carcassonne and Le Baux-de-Provence.“

Being avid travellers Mary and Robert have travelled to Europe many times over the past 30 years, but Barcelona was still on their list of places to see. Finally now they followed the many recommendations of travel journalists they’ve been following and headed to Barcelona.

The city exceeded their expectations and as Robert puts it “opened a new door of exploration to Spain that we had not considered before. We shall return.”

What particularly stood out for them in Barcelona was the unimaginable majesty of the Sagrada Familia. This was in fact one of the deciding factors for them to select Barcelona as a travel destination and choosing an apartment in walking distance of it.

We also asked the couple if they had any recommendations on restaurants or bars and this is what they answered:

“No, we shopped in the local markets and brought our food home to cook in the apartment. You can’t put your feet up on the balcony railing after a fine meal when dining at a restaurant! No restaurant beats the feeling of feeling at home…"

In the name of the whole company we congratulate Robert and Mary on their anniversary and wish them many more to come. Maybe we’ll see them around again someday.