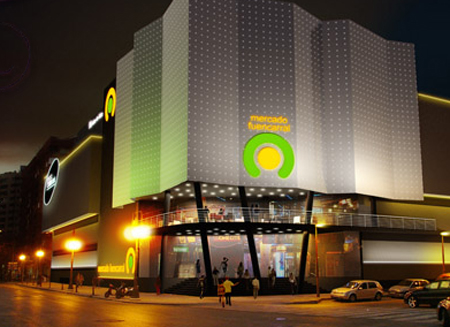 The Spanish capital is known for its culture, its financial and political power, as well as for its artistic creativity. This last quality is reflected in the Fuencarral market, the alternative and creative heart of Madrid. Since its opening back in 1998, it has not stopped hosting the forefront of fashion, giving the opportunity for young designers to have a space to offer their designs in a modern setting appropriate to the purpose of the initiative.

In 1998 the market was opened after the restoration of a former old and chipped building situated between the Chueca district and the Puerta del Sol (Gate of the Sun). The restoration was accomplished by the architect Horacio Domínguez, while Nacho James was in charge of the design. It opened with a clear intention that was capitalized by its slogan "The shopping centre for those who hate the shopping centres."

This market is modelled after the London markets. Thus, in its 3000 square meters, there are about 60 shops of all kinds: second hand, top brands, shoes, hairdresser’s, tattoos and piercing, art, decor, jewellery, etc. However, this space is also devoted to an alternative entertainment for the party-goers from Madrid. The basement is designed to hold a cafeteria where people can relax and listen to the music played the indie DJ’s, giving rise to an alternative setting, full of lights, colours and innovative trends. A place which has become the cultural and independent reference in Madrid, thanks to the many trends that grow within its walls and to the musical and cultural initiatives.

The market, however, was surrounded by controversy, because in 2009, it was about to be shut down when almost a sales agreement in the interest of a large clothing chain succeeded. At that point, business owners were offered the possibility of moving their shops to the brand new market with similar principles recently opened in Valencia. However, only 5 out of the 60 shops accepted it. Fortunately for Madrid’s youth, the initiative did not matured and the doors of this very much like London Camden market still stands as the more alternative and cultural anchor of Madrid.