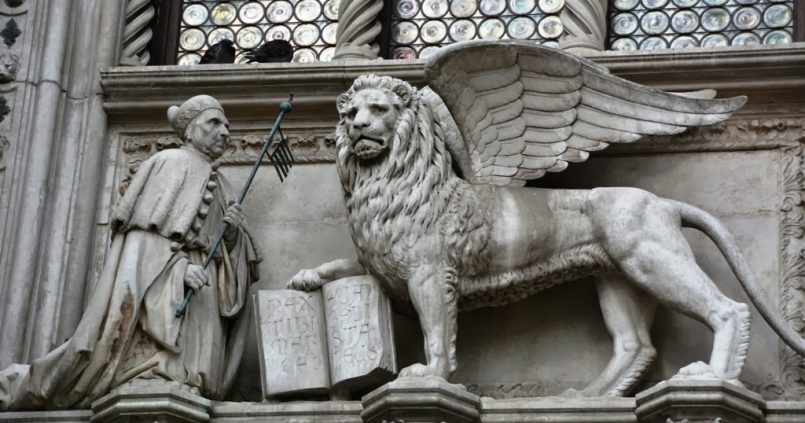 Today’s post is about Venice and we are steering well clear of the stereotypical. There will be no gondolas or gondoliers, no mention of carnival or masks, no glass blowing and you can forget about the canals. We aren’t going anywhere near these topics instead we are going to discuss some of Venice’s curiosities. So follow us as we jump into a gondola to cruise the canals in our masks during carnival to uncover some of what makes Venice special. Ooops!

The Winged Lion: This book reading winged lion is the symbol of Venice. The book the lion is reading is engraved with the words ‘Pax Tibi Marce, Evangalist Meu’ which translates as ‘May peace be with you,Mark’. These words were spoken to St Mark by an angel on his first visit to Venice. Whilst in Venice you may see our studious lion with a sword instead of book, this meant Venice was at war when he was carved. Unfortunately most of the lions you see in Venice today aren’t the originals as they were destroyed by Napoleon’s troops in 1797.

Spritz: Venice’s most popular drink consisting of equal parts white wine, mineral water and either a sweet or a bitter liquor. It was during the time the Hapsburg Empire controlled Venice that this drink gained popularity. In fact the name ‘Spritz’ is Germanic in origin meaning splash or sprinkle. Today it is considered Venice’s preferred tipple.

Alleys: Like canals, alleys can be found all over Venice. But the Calletta Varisco near San Canciano is the narrowest at only 53cm wide. Definitely not a two way street.

Fighting for Bridges: As you would expect in a city of canals there are plenty of bridges, in fact there are 417 bridges to be exact. From the 14th century onwards these bridges were the scene of many a bloody battle between the rival “Castellani” and “Nicoletti” clans. These fights known as the ‘Stick Wars’ usually took place between September and Christmas and the objective of which was to take control of the bridge. After many deaths the wars were banned and replaced with ‘Forze d’Ercole’ , human tower building.

Bridge of Sighs: Possibly Venice’s most photographed bridge it connects the New Prison with the interrogation rooms of the Doges’ palace. Legend has it Lord Byron gave the bridge its name, it was often the last view of Venice the prisoner had before beginning their imprisonment, which as you could imagine elicited a sorrowful sigh. Another legend promises eternal love and bliss to those who kiss under the Bridge of Sighs at sunset in a gondola with the bells of St Marks providing the romantic backing music. Ooops! Did it again.

There you have it. A few bits of interesting bits of trivia you can impress your friends or family with when you’re in Venice. Do you know of any other Venetian curiosities?