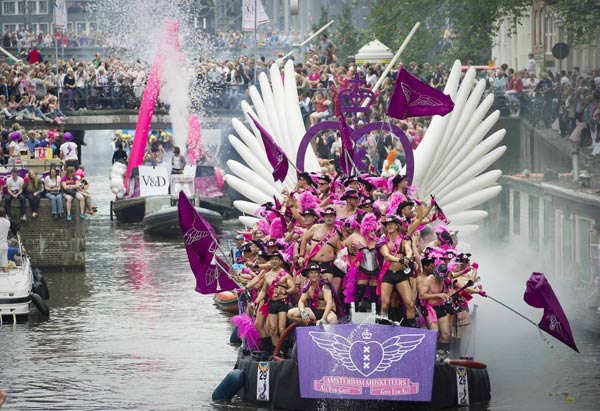 The Netherlands are pioneers when it comes to the rights of the LGBT collective. For example, it’s no secret that the first gay marriages were celebrated here. Because of this, it’s no surprise that Amsterdam is often considered one of the greatest gay culture capitals. And this is more obvious than ever during its original gay pride celebrations.
Gay Pride in Amsterdam is a very special event, above all due to its famous parade. The parade is carried out by boat through the canals, which gives it a very different feel from other cities.
The gay pride celebrations in Amsterdam in 2012 will be from the 28th of July until the 5th of August, although the most memorable moments will be concentrated into the weekend of the 3rd to 5th of August. The dates are a bit later than other cities such as Paris, Sitges or London, which is an advantage for those who don’t want to miss out. Despite the fact that many activities are on offer, the peak moment of Gay Pride in Amsterdam is the canal parade.
Every year, it attracts around 500,000 spectators, and is one of the most colourful and impressive gay pride parades in the world. The parade features participation from around 80 boats specially decorated for the occasion. All will bring music, DJs and people competing to see who can dress up in the most extravagant way on board.
The parade leaves from the outskirts of the Central Station, and will navigate through the Prinsengracht Canal and the Amstel river and up to Oosterdock. The 2012 canal parade will be celebrated on Saturday the 4th of August, from 2pm.

Places to go out during Gay Pride in Amsterdam

During the entire week, Amsterdam will be filled with street spectacles, concerts, themed parties in bars and clubs… Here are some of the places the town to go out and paint the town. • Plaza Rembrandtplein – This famous square will become the HQ of the gay pride events in Amsterdam. Music, partying, concerts and other activities for everyone will be maintained at all times.

• Calle Reguliersdwarsstraat -In this area, there’s many gay-friendly bars. A stage will also be put up, and a youthful atmosphere encouraged.
• Calle Zedijk -This street will be focussed on slightly older gays and “bears” of all nationalities.
• Calle Paardenstraat – Here, celebrations for women and lesbians will be organised.
Gay Pride in Amsterdam, however, is not just a week dedicated to dancing, partying and alcohol. These celebrations also offer a great variety of sport and cultural events. Museums will organise exhibitions with gay and lesbian themes; there’ll be guided visits to various parts of the city; football and volleyball matches and races will take place… You can discover the rest of the activities on the official webpage of the event.