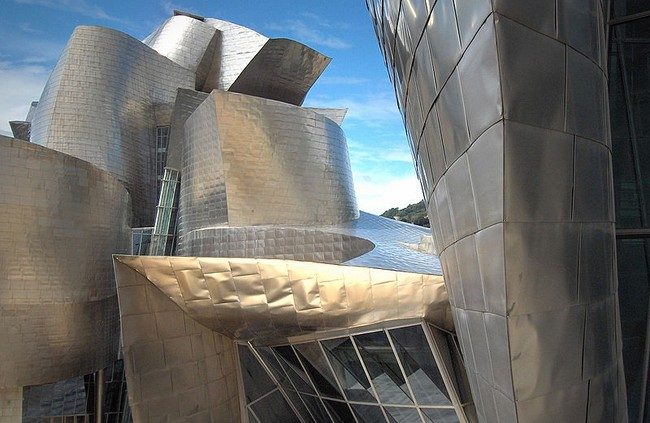 Spread out over 24.000m2 the Guggenheim Museum in Bilbao is one of Europe’s most spectacular buildings. And it’s not just for the impressive size. Seen from afar it appears to be a chaotic structure made of shining twisted metal, as you get closer, the curves take on a certain logic and from the banks of the Nervión River you’d swear it appears like a boat. Designed by Canadian architect Frank Gehry, the Guggenheim Museum in Bilbao was opened in 1997, not without controversy, mostly due to the enormous costs involved in its construction. Many also questioned why the Guggenheim was built in Bilbao, an industrial city which at the time wasn’t featured on any tourist itinerary. The Basque Government decided to invest in the city to reinvigorate the image and stimulate the economy. Norman Foster was put in charge of re-designing the metro, the new airport terminal was given to Calatrava…the only thing missing was a modern art museum so they got in touch with Thomas Krens, director of the Solomon R Guggenheim Foundatio. Krens had been looking for an opportunity to establish a Guggenheim Museum in Europe and plans to build a museum in Salzburg had just fallen through, it was a match made in heaven.

Since opening the Guggenheim Museum in Bilbao receives more than one million visitors annually. Covered in titanium sheets, glass and limestone it is a mirror image of the city. Spanning three floors the spacious curves fill with temporary exhibitions. The majority of the exhibitions are sculpture, paintings, installations and contemporary electronic arts although in the last few years exhibitions featuring more traditional art have been held.

Although in my experience the temporary exhibitions of the Guggenheim Museum in Bilbao are much more attractive than the permanent collection. Although there are some notable works of art worthy of a mention among them Richard Serra’s, The Matter of Time, an enormous installation made of rusted metal sheets in the form of spirals, ellipses and passageways. The eye catching work of Jenny Holzer is also another prominent work of art, panels of luminous diodes spell out Basque texts. Forming part of the Truismos series you can read such things as “Say your name” and “Put away your clothes”. One of the most popular works of art at the Guggenheim in Bilbao is "Puppy", a giant floral dog. Created by artist Jeff Koons it was only meant to be a temporary exhibition but this west highland terrier measuring 12m tall and weighing in at hefty 15 tonne has become the museum watchdog. Another illustrious animal at the Guggenheim Museum in Bilbao Louise Bourgeois’ giant spider titled "Mamá", a peculiar homage to his mother who was a seamstress. There are various copies of this sculpture around the world. In Bilbao Mama can be found at the back of the building under the Salve Bridge.

Close to Mamá and also on the outside of the museum is "Tall Tree& The Eye", a monumental work by Anish Kapoor made up of 63 reflective spheres. Posted in Art and Museums in Bilbao, Bilbao
Laura