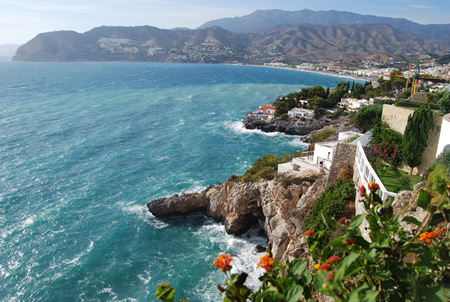 Almuñécar, in Granada, is a village which combines the perfection of the sea and the mountain. It benefits from a tropical climate (unique to Spain), with balmy temperatures even in winter. To get ready for your holidays, here’s a short guide to Almuñécar.

In Almuñécar, there’s a total of 26 beaches which are spread along the 20kn long coast. All of them are great for going for a dip or forgetting the summer heat. Furthermore, all year long there’s a large variety of courses and activities on offer: from sailing, windsurfing or diving classes to motorboat rental and boat excursions to discover the Costa Tropical.

The most popular beaches in Almuñécar are Velilla, San Cristóbal, Cotobro and Puerta del Mar. A little further from the centre, and less crowded, for those who prefer a good dose of tranquillity while they sunbathe, are the beaches of Cabria and Barranco. To have a go at some nautical sports (especially scuba diving), the best options are Herradura beach and the Brengueles beach.

Another gem of Almuñécar is the animal reserve Peña Escrita. It bears a natural balcony from which you can see the Sierra Nevada and is a great place for sports like hiking, paragliding or cycling.

Almuñécar has a large history and interesting cultural heritage. It was founded by the Phoenicians in around 800 a.c. A necropolis and fish salting factory have been conserved from this age. The place also contains archaeological remains from other ages: Roman aqueducts, mediaeval streets, Muslim watchtowers and the San Miguel castle, a fortress from the 10th century.

In respect to the region’s gastronomy: as is often typical in the Granada area, in Almuñécar free tapas is often served with drinks. Due to its location on the coast, the protagonists are fish and seafood: fish grills, paellas, rice dishes… Thanks to its particular climate, lots of tropical fruit and other products are cultivated in the area, which have also made their mark on local food. You can mainly try these in salads and deserts.

In summer, furthermore, Almuñécar is the seat of Jazz en la Costa, the most important Jazz festival in Andalucía. And during the week beginning the 15th of August, the Almuñécar celebrates its annual village party.