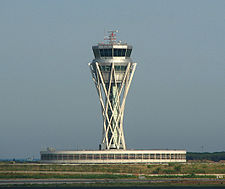 Barcelona Airport, commonly known as El Prat, is located 13km southwest from Barcelona. The airport is the second largest in Spain behind Madrid-Barajas Airport and is the largest in Catalonia. There are multiple ways to reach the city centre of Barcelona from the airport; we made a guide with the best options.

By Aerobus The Aerobus service is an express bus service that links Barcelona airport to the city centre. The shuttle service runs every 6 minutes within its fixed hours of operation. The Aerobus runs from both Terminal 1 and Terminal 2 and takes u to the city centre of Barcelona. The two main stops for tourists are Plaza España and Plaza Cataluña, there are other stops but these two are the closest to the centre. Tickets for the bus cost 5.05 euros for a single and 8.65 euros for a return ticket.

By Train The Renfe train service runs approximately every 30 minutes to and from Barcelona airport to the city centre. Travel time is approximately 25 minutes. The train runs from the stations Clot, Passeig de Gracia, and Barcelona Sants. The train only reaches to Terminal2, where a bus can be taken to Terminal1. The train station is about 5 minutes walk from the main entrance of the airport.

By Taxi The taxi service in Barcelona is generally very good, clean and reliable. The costs should be between 25 and 30 euros, depending on what terminal u leave from. There will also be an additional surcharge charge for each bag you’re carrying. Costs are also shown on the inside of the taxi.

By night bus This bus operates during the day between the hours of 05:00 to 00:15 at night from both airport terminals. The no. 46 bus travels from the city centre stopping first at T2. It then continues on to T1. This bus takes longer than the shuttle bus and stops more frequently. The schedule is ideal if u have to reach the airport at night or early in the morning.