Guide to reach the Girona and Reus airports from Barcelona 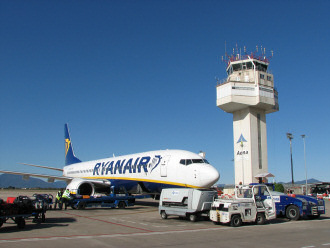 As we have already reported, the low-cost airline company Ryanair will begin to operate up to September in the El Prat airport and up to November it will expand flights and destinations from the airport of Barcelona. However, the Irish company will continue its regular flights from the other two Catalan airports , the Girona and Reus airports. For those of you who take a flight from one of the last two airports, here we want to offer you a guide to help succeed to reach your destination without further complications.

If you have booked a flight from the Girona Airport there are three possibilities.The first, easiest and cheapest option is the bus. The bus belonging to the company Sagalés depart from the Estación del Norte (North Station), located near the Arc de Triomphe. If you want to get there, you can do it by subway, the next stop is the Arc de Triomphe (Red Line, L1). The bus company is not dependant on Ryanair, nevertheless, its schedules matches to the times of departure and arrival of the airline flights.You can check the timetables here. Bus tickets can not be booked in advance but can be purchased at the company’s stand in the same bus station. The single ticket costs 12 euros, while the return costs 21 euros. It is also possible to reach Girona by train with the Spanish company RENFE (the trip takes 1 hour and 10 minutes). However, from Girona train station it is only possible to reach the airport by a metropolitan bus or by taxi (aproximately 20 Euro per trip) on a journey that takes about 30 minutes extra. It is also possible to get from Barcelona to the airport by taxi, costing the trip around 120 euros.

If your flight departs from the Reus airport, there exist two different possibilities. The first option is again the more convenient and affordable, the bus. This route is run by the private enterprise La Hispano Igualadina, and the departure point is at the exit of the train station of Sants. Their schedules are available here, although you must look for possible last minute changes. The price of the single ticket is 12.50 and for a round trip 22 Euro. Also possible is to go by train run by RENFE from Sants station to the train station of Reus, located in the center of the city. From there you can either take a taxi, or a bus, which takes 10 minutes with a price of two euros.