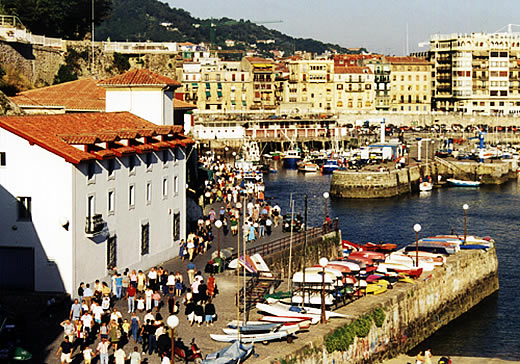 The Definitive Guide to San Sebastian

The beautiful Basque city of San Sebastian overlooking the Bay of Vizcaya is a real joy to visit, from wandering the old city, admiring the French influenced Belle Epoque architecture to spending time enjoying the swimming in the cool waters of the bay or simply walking along the famed Playa de la Concha. There is something for everyone in San Sebastian and here is our guide to San Sebastian to help you make the most of your visit.

San Sebastian is blessed with some beautiful beaches, the most famous of which is Playa de la Concha, located right in the heart of the city and stretching for 1.5 kilometres, this magnificent beach is ideal for a lazy summer day, the calm protected waters, the view of Santa Clara Island and the Cantabrian Sea make it a great day out. It is no surprise that it has become an iconic symbol of San Sebastian, and that is why it is in our guide to San Sebastian.

This Museum in a former 16th century monastery houses paintings from the Renaissance, Baroque through to the 19th century. The majority of the featured works are those of Basque painters. Other featured works include those of Goya, el Greco and Tintoretto. The San Telmo museum also has a range of Basque archaeological relics, an extensive collection of historical photographs of San Sebastian and the Basque country. Where:Plaza Zuloaga 1 Parte Vieja. When:Tues-Sun. 10am to 8pm. Closed Mondays.Price:5€ General, 3€ Concession. Free entry on Tuesdays.

Another delight in San Sebastian is the availability to see magnificent pieces of Art in public spaces. Two of the most famous pieces are Chillida’s Wind Comb and Oteiza’s Empty Structure, the former can be found at the very end of the Promenade. The twisted metal of the Wind comb clings precariously yet defiantly to the coast line, holding on against the constant attacks from nature’s fury. The Empty Structure is another symbol of the fusion between the fury of the sea and the strength of the iron sculpture, it is a profound dialogue between art and nature.

For spectacular views of San Sebastian head to the top of this mountain via the path behind the Aquarium or from behind the Museum. Topped by a castle and an enormous statue of Jesus Christ, the castle houses a small museum outlining the history of the city of San Sebastian.

Located in the middle of the bay is Santa Clara Island, offering for spectacular views of the city, take a stroll along the café lined paths and have a look at the unusual lighthouse or best of all enjoy the small beach. There are several ways to get to the island, the proximity of the island to the beach means it is possible to swim or there is a ferry service leaving the port every half hour it is also possible to walk at low tide.