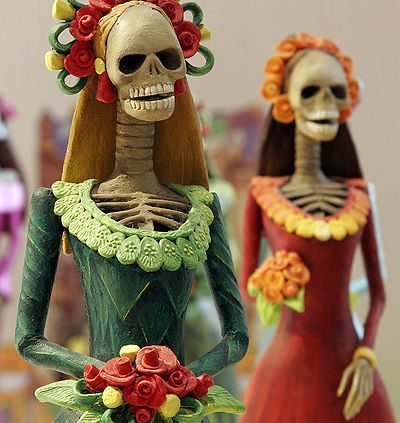 Just in case you don’t have any plans for your Halloween in Madrid, we would like to make a few suggestions and guide you through the confusion of activities and various events that are taking place in the Spanish capital to celebrate the “Day of the Dead” (Halloween equivalent in Spain). Although in Spain this is mainly a religious festival, contact with the Anglo-Saxon culture and the American concept of Halloween is now well entrenched, thus the Spanish now follow on with these traditions.

An interesting way of coming into contact with the most ancient South American traditions is spend the Day of the Dead in the Palacio de Linares (Palace of Linares) on the 30th and the 31st of October. There you can discover the offerings to the dead from Bolivia and Peru, the ritual dances of the Dominican Republic, and the traditional skull from Mexico. These are some of the traditions that are celebrated in the Casa de America function rooms for all those that wish to participate in a unique Day of the Dead. The Linares Palace, traditionally a place with disagreeable sounds and terrifying noises, will be opening its doors in the evening on the 30th and he 31st of October to show the traditional rituals from the different countries in South America on the Day of the Dead. You can get tickets for a guided tour of the Palace by figures that lived there in the XIX century, and you can discover the mysteries and secrets that the Night of the Dead entails in these countries through the events and games that will dotted all around the Palace, as well as a special production.

A classic way of spending your Halloween is in the Madrid Theme Park that is well prepared for this terrifying evening. The Park will be celebrating this blood curdling night in a very special way with activities and beings from beyond the grave wandering its paths, meals accompanied by entertainment, visits to the old, rambling house and a party going on well into the early hours of the morning. If you fancy spending this hair-raising night in the Warner Park, then be assured that this complex has a very special night organised. There are two new passages of terror only suitable for the bravest amongst you, and one of them will only open at sunset. Two classic Halloween events in Madrid, suitable for all the family, with the perfect atmosphere for spending the most terrifying night of the year.

Finally, if what you would prefer is spend your Halloween at a private party at home or in the various pubs that there are sure to be dotted around the city, there is nothing better than creating the mood for the scariest night of the year. Therefore, we recommend that you head down to the Vestuario Izquierdo fancy dress shop, where you can hire special costumes. You can also find Halloween costumes in Fiestas Paco, in Barullo shops, or La Rosa Negra. In Christy, aside from fancy dress costumes they also sell other Halloween related articles such as party decorations, pumpkins, garlands, bats, and skeletons, etc. perfect for achieving the gloomiest and most sinister atmosphere possible.

To conclude, we hope that you get well into the Halloween spirit, and that you get the best fancy dress costume possible if you’re celebrating with a private party. Happy Halloween!

Posted in Madrid, Things to do in Madrid
Claudia