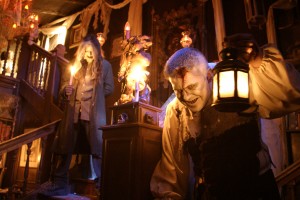 Yes, Halloween isn’t something that is typically celebrated in Spain, however it is a fun event that gains an increasing number of followers every year, including in Spain. Thus, if you’re not lucky enough to be going on a little break and celebrating Halloween in London or Halloween in New York, here’s what you can do in Madrid.

Halloween in the Parque de Atracciones theme park – Halloween in a theme park? Why not? The Parque de Atracciones theme park in Madrid will be undergoing a terrifying transformation during the month of October. The Angel of Death, zombies, skeletons and other spine-chilling characters will be hunting you down when you least expect it. You can attend a dance with vampires and demons, visit the passages of terror, become the star of a horror film and try a special and recently cooked dinner from the ovens of hell. Where: Parque de Atracciones (Casa de Campo). When: Up until the 31st of October. Saturdays and Sundays, national holidays and the 31st of October. Price: normal 29,90 euro, 3 to 6 year olds and over 65s 23,90 euro, and under 3s get in free.

Chocohalloween – A chocolate Halloween for those with a real sweet tooth. The 7th edition of the Chocolate Show will be held in Madrid with Halloween themed celebrations. Artisan chocolate producers will be making chocolate reproductions of legendary characters in horror films, as well as chocolate spiders, tomb stones and coffins. In addition, various activities will be run alongside open to everyone and there will be workshops for children. Where: Moda Shopping shopping centre. (38, Avenida General Perón). When: From the 27th to the 30th of October. Price: Free.

Halloween in the Warner Park – Whether it’s with your family or your friends, you can enjoy a terrifying Halloween surrounded by monsters, witches and mummies. Over these horrifying dates, visitors will able to see new shows and attractions especially organised for Halloween and make them scream such as the new tunnel of terror “Hell”, the monster parade and the musical “The Shop of Horrors”. Where: Warner Park. When: Up until the 1st of November. Saturdays and Sundays, national holidays and the 31st of October. Price: normal 39 euro, children and over 60s 30 euro. Discounts are available if you purchase in advance online.

Fiesta de Halloween in the club Downtown – A huge Halloween party during which they will be screening some frightening episodes of the series “Cemetery of Stories”. Popular figures such as Freddy Kruger or the little girl from the film the Exorcist, will be attending the event. There will also be a fancy dress competition and prizes will be awarded to the three best Halloween costumes. Where: Downtown, Madrid (21, Calle San Mateo). When: Monday the 31st of October from 11pm. Price: Advanced purchase 32 euro. Includes a free bar up until 4am and snacks all night.

Have a look at this article if you’re looking for Halloween fancy dress shops in Madrid.