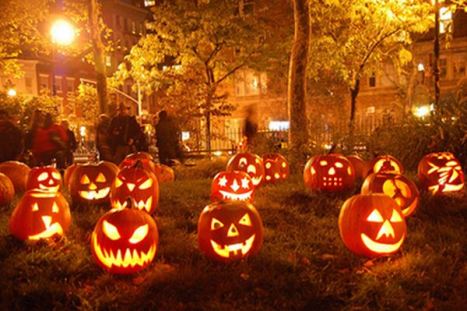 When the 31st of October approaches, New York dresses up in black and orange to celebrate one of the most important and spine-chilling dates on the American festive calendar. Do you fancy celebrating Halloween in New York?

Jack-o`-lanterns, black cats, haunted houses, sweets, spiders’ webs, monsters, witches, costumes, vampires, spirits……and all kinds of ghoulish images that you might find in typical American horror films creep into our imagination when we think of Halloween. Halloween is a very special time for visiting New York and wandering the streets decorated especially for the occasion.

In New York, just like everywhere, Halloween is a big celebration and from mid -October we will see various Halloween related activities taking place across the city including Boo at the Zoo at the Bronx Zoo or the Pumpkin Festival in Central Park.

This tradition dates back to a Gaelic harvest festival called Samhain, where they celebrated the end of the harvest and the year, and honoured the dead who were allowed to walk amongst the living on this special evening. These pagan roots later combined with the Christian festival, the “Feast of All Saints” and thus Halloween was born which is celebrated in Anglo-Saxon countries.

On Halloween night, the highlight of the celebrations is the huge night time parade though Greenwich Village. With 50,000 participants and two million spectators, it is the biggest in the world. Throughout the parade there are spectacular giant puppets, dancers, jugglers, music and thousands of new-yorkers donning original and extravagant costumes. The main theme of the parade changes every year. This year’s will be “The I of the beholder” and will be dedicated to the Disembodied Eye, creepy and mysterious. After the parade, the party will continue and those in costume will make their way to the pubs and spread out across the city.

Another unusual celebration is the Halloween Extravaganza that takes place inside the Saint John the Divine Cathedral. Every year a classic silent horror film is screened accompanied by live organ music. This time guests will get the opportunity to see “The Phantom of the Opera” (1925). After the film, the Procession of Ghouls starts comprising a parade of puppets, ghosts and figures where creatures of the night scurry down the cathedral corridors, amongst the wooden pews and intermingle with the spectators. The show takes place on Friday the 28th of October. If you would like to go, we recommend that you get your tickets for the event now. Because they sell like Jack-o`-lanterns!

In addition, there are also events organised for children during these dates aside from the habitual Trick or Treat. In the Natural History Museum, families can enjoy a terrifying day amongst the ferocious dinosaurs, with craft workshops and live shows. In the Brooklyn Children’s Museum, they celebrate the Mexican Day of the Dead, where they eat the typical bread of the dead, drink hot chocolate and create one of the typical skeleton puppets.

Of course, you can also head down to one of the haunted houses especially designed to plant the seed of terror in visitors, such as Blood Manor or the Bayville Haunted Firehouse.

There are lots of things to do on Halloween in New York and in many other places across the city there are always shows, dances, concerts, parades and pumpkin carving workshops and competitions. Trick or treat?