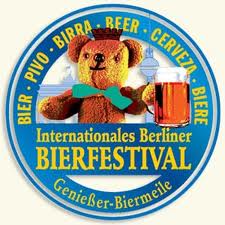 When we think of Germany, the first thing that springs to mind is beer, probably because it has one of the biggest beer traditions in Europe. In Germany, they produce a countless number of high quality beers and it is estimated that the people there drink an average 130 litres a year.

Drinking beer is part of their gastronomic and cultural tradition, and is an ancient custom. It was drunk by German tribes in the south back in the VI century AD and it became popular amongst the population during the Middle Ages when it was made in the monasteries. There are many festivals celebrated in Germany with this refreshing beverage taking centre stage, the most famous being Oktoberfest that allures more than 6 million people from all over the world every year. A smaller, but as equally fun event, is the Berlin Beer Festival. In addition, it is conveniently celebrated just before Oktoberfest and in summer.

The Berlin International Beer Festival, which is held from the 5th to the 7th of August, is also known as “Biermeile” or the Beer Mile. The Karl Marx Allee Boulevard, located in the town centre, is transformed into an enormous beer garden full of wooden stands and tables where you can try large jugs of cold beer with nice frothy heads.

You can try more than 2000 varieties of homemade and commercial beers produced not only in Germany, but in 86 other countries, including Belgium, Poland, the UK and the Czech Republic. Although we doubt very much you’ll be able to try them all…..

Alongside all the drinking, there will also be numerous live concerts and performances taking place to liven up what will already be quite an animated event.

Furthermore, this year, in celebration of the 15th edition of the event, they will be attempting the beat the record of the largest beer garden in the world. Therefore, there will be tables running along 2 km where locals and tourists alike are invited to drink side by side. You fancy helping out?

Entrance is free, so start practising your German and prepare yourself to get to know Berlin, its culture and people from all over the world who will be assembling in the city over the festival days to have fun and try some of the best beers there are. Prost!