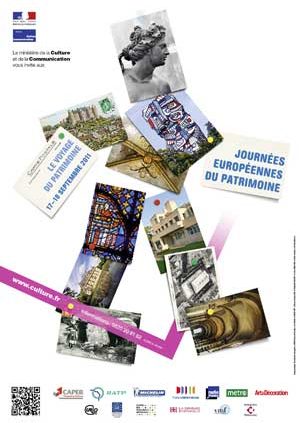 Every year in September they celebrate European Heritage Days in Paris, which allows the fortunate public to access the historical monuments in the French capital for the modest price of nothing for an entire weekend. Are you going to let this opportunity slip through your fingers?

European Heritage Days started back in 1991 with the aim of making people aware of the value and diversity of cultural heritage, through open door days to the most iconic historical monuments in the city. The scheme was organised in France a long time before, 28 years to be exact and it was so successful that it was later adopted by the European Council and then extended to a total of fifty countries.

On the 17th and 18th of September the museums in Paris will be open for tours, conferences and free activities. You will also have access to permanent and temporary exhibitions, and get the chance to discover the inside of historical buildings such as the Elysée Palace, the official residence of the French President, the French National Assembly, the City Hall, the National Archives and Hôtel de Lamoignon that houses the historical library of Paris.

A total of 15,000 monuments will be opening their doors to the public so that visitors and locals alike can discover the marvels of this great city for free.

The chosen theme for this year is the “Le voyage du Patrimoine” (The Heritage “Voyage”), thus they will be highlighting international artists and foreign influences and styles that have contributed to the great national buildings in Paris. They will also be creating diverse routes around the city allowing visitors to discover the architectural wealth from the largest buildings to the smallest fountains, sculptures and squares in Paris which can be completed by bike or on foot.

This is a great opportunity to get the most out of your visit to Paris. Thus, make sure you take a look at the official website of the event from the 22nd of August for the complete list of activities and places that you will be able to visit during European Heritage Days in Paris.