History and curiosities of the Ponte Vecchio 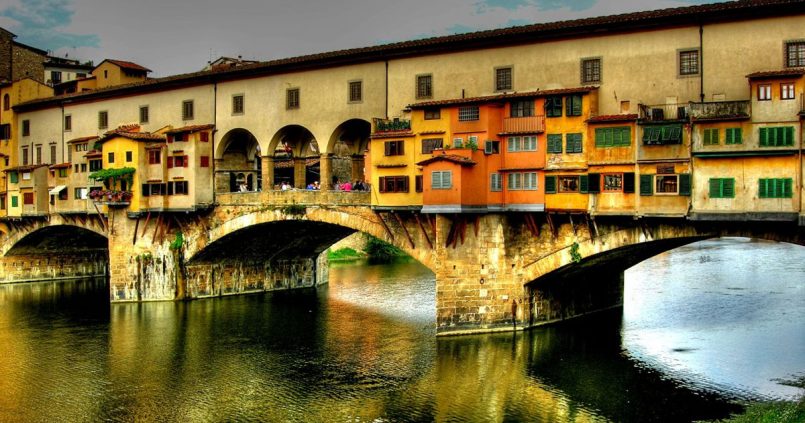 The Ponte Vecchio in Florence

The Ponte Vecchio is one of the most photographed places in Florence. We found very difficult to decide whether it is more popular or not than the cathedral with its beautiful lines of colored marble and its gigantic dome…. When you go to Florence you shouldn’t miss either one. The Ponte Vecchio with its beautiful brown houses floating over the Arno River is unforgettable.

The origins of this place go way back to Roman Empire times, when it was just a simply wood bridge in the narrowest place of the river. With the pass of the time this place started to see improvements and it was replaced for a stone bridge in 1345 after it collapsed in a flooding. The one in charge of doing the renovations was Taddeo Gaddi which proposes a very innovative design for the time.

Among the centuries XV-XVI, the Ponte Vecchio in Florence became a center of commercial activity. In this place were sold fish, fruit and above everything else meat, making it a kind of market and the river where all the waste was thrown away. It is said that the great commercial success was because nobody had to pay fees to trade on the bridge. That was when the hanging houses that give it its characteristic appearance emerged.

In the XVI century, when the Duke of Tuscany, Cosimo I de ‘Medici, moved his residence to the Pitti Palace, he had built a covered aisle to connect the palace with the bridge, this palace was located on the other side of the river and where the seat of government and hall the city were. The corridor was built on the east side of the bridge, on shops so the Medicis could cross without mixing with other people.

This aisle is 750 meters in length and is very well known as Vasari Corridor, in honor of Giorgio Vasari, the architect who built it. Inside the aisle there are numerous works of art owned by the Medici as well as a collection of self-portraits.

In 1593, Fernando I de’ Medici annoyed by the odors from the market in the bridge forbade the butchers to sell in the Ponte Vecchio and ordered them to evacuate the place. In their place the goldsmiths and jewelers were established on the bridge.

Unlike other bridges in Florence, the Ponte Vecchio was not destroyed by Nazi troops. The legend says that it was Hitler himself who ordered not to touch the bridge because he was captivated by its charms. Although it wasn’t destroyed it was heavily damaged. At the south end of the Ponte Vecchio, above the Vasari corridor it’s located the Marinelli Tower. This tower is the only one out of the original four that survived the pass of the years.