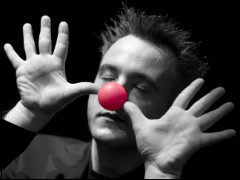 The International Magic Festival, Hocus Pocus in Granada, is turning 10 this year. From the 23rd to the 27th of November 2011, it will be celebrating this monumental birthday with a fascinating programme including shows to suit all tastes.

This year’s Hocus Pocus offerings have been reduced due to the crisis, the reason for which they have had to exclude the street shows and workshops, however the magic in Granada is still alive. The organisers of Hocus Pocus have pulled out all the rabbits in their hats to offer the best magic and illusions in the world this year.

The Hocus Pocus Festival 2011 will feature magic acts that have been awarded for their quality and originality. There will be galas with international artists and functions for children taking place in different venues across the city. There will also be the popular “Magia Golfa” sessions in the Picaro pub.

Javier Benítez “Chango” will be presenting his chameleonlike show “Magia de Pata Negra” (Black Duck Magic) comprising a combination of comedy, games and mystery with audience participation whilst Versatile Willy Monroe, specialising in the art of creating balloon sculptures and soap bubbles, will surprises audiences with “Globosesion”. In addition, Cayetano Lledó will be performing his original magic act “Maxico Circus Cabaret”, in the Isabel La Católica Theatre where the owner of a circus, which has no performers, is forced to play the different artists so as not have to close the business: the bearded woman, sleepwalker, Chinese magician…

The following best national and international illusionists of the moment will be performing in “Cabaret Mágico” over the two days it will be taking place; Félix, Miguel Muñoz, Nobert Ferré, Laví e Bel, Timo Marc and Dúo Kybalion. Finally there will be mentalism, visual effects, ventriloquists and clowns….Pure magic!

During the Hocus Pocus Festival in Granada, visitors will also be able to see the first show of the PuntoCero company “Choices”, which combines audiovisual projections, magic and theatre, as well as jugglers and pantomime with Brando and Silvana in “Circus”. Children will have a great time with the fun magician Kayto during his show “AloKayto” and with the magic and music show “Arpacadabra”. The cherry on the magic cake of this edition of Hocus Pocus 2011 will be the charity gala “Magia por un sueño” with all proceeds going to the SOS Children’s Villages charity.