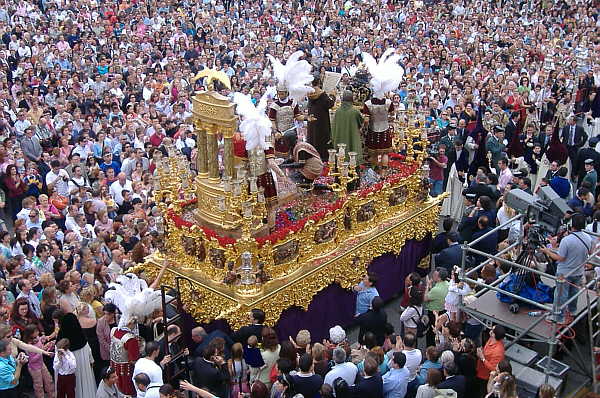 Similarly to many other Spanish cities, Seville will be holding its own Semana Santa celebrations from the 17th to the 24th of April. However, the Holy Week festivities in the Andalusian capital are by far the best and the most elaborate in the region as the city, renowned for having some devout catholic residents, really marks this special occasion. It comprises one of the most important weeks on their calendar and some of the most famous religious celebrations in the country.

For the entire week the city is crowded with visitors and residents gathering to watch the processions pass by. Please bear in mind that there are many as each district presents their own, thus as much as 60 can be scheduled. These processions comprise pasos or floats containing individual scenes of the events of the Passion and quite commonly the image of Virgin Mary weeping for the loss of her son. Some sculptures are of great value as they are antiquities and more often than not the floats are at least gold plated or contain other precious metals. During the year they are kept in the various churches where people may come to admire them.

Areas of Seville and especially the city centre are sectioned off with fences the entire week for the processions. They contain chairs for those who wish to pay and get a front row seat.

The processions traditionally start at the home churches of the various districts that eventually make their way to Seville Cathedral in the centre, on Avenida de la Constitución. The climax is on the night on Holy Thursday whereby the grandest and most popular ones set out to arrive at the cathedral on the morning of Good Friday. It truly is a spectacular sight as the beautiful floats bearing the wooden sculptures of Saints are adorned with candles that light up the city, and the music accompanying the procession is quite haunting.

Semana Santa is especially important for the Sevillian catholic community who take this week very seriously, thus the impact on the city is very strong. Visitors can expect locals dressed in traditional black with especially the women wearing the mantilla or the mantle hairpieces on Maundy Thursday and Good Friday to mourn the death of Christ.

Finally, the idea of the processions during Holy Week is penance. A guiding cross features at the beginning of every procession and participants dress in habits with the distinctive pointed hood. They also hold a long wax candle (only lit at night), and their outfits can vary in colour in accordance with the brotherhood and location of the procession. There can be as many as 3000 people participating and the processions can last up to 14 hours. In addition, the floats are not motorised, they are carried by a team of men called “costaleros” who support the wooden beams on their shoulders and necks. These pasos can require up to 55 men as they must weigh over a metric tonne. Once again the theme is penance and those bearing the floats consider their role an honour.

So, now you know. If you are visiting Seville or would like to go during this special week then we suggest that you stay in a Seville apartment. We have some well-located apartments that are situated right in the heart of the action so you will most definitely not miss out of any of the Semana Santa celebrations, which are truly spectacular. We also recommend that you do you so in advance because this is a very popular time of year for visitors, not only from abroad but also from other parts of Spain.