How to get to Barcelona airport 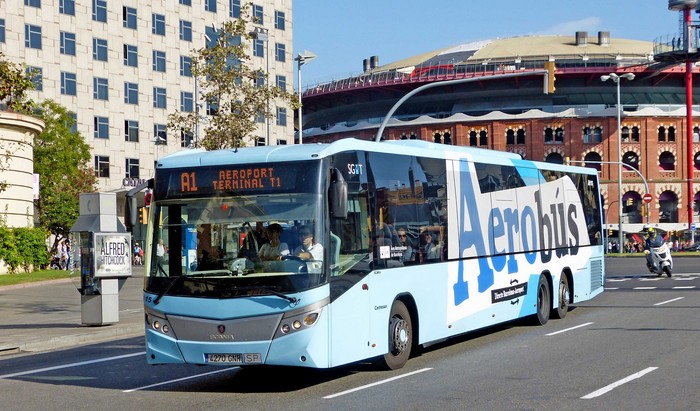 Welcome to Barcelona! Do you know how to get to your apartment from Barcelona airport? No? Don’t worry, we’ve put together this handy guide to the public transport options to and from the airport so that you can decide which works best for you. Another option is to hire a car at the airport.

Train to and from Barcelona airport

The RENFE Aeroport train station is at Terminal T2, but there’s a free shuttle bus between Terminals T1 and T2. The journey takes about 25 minutes and costs about €4. Trains leave every 20 minutes and stop at the following stations in Barcelona: Sants, Passeig de Gràcia, El Clot–Aragó.

Bus to and from Barcelona airport

Several buses run to and from the Barcelona airport.

AEROBÚS
Aerobús runs two direct express buses to and from the airport: Aerobús A1 goes to Terminal T1; Aerobús A2 goes to Terminal T2. They make three stops in Barcelona: Plaça d’Espanya, Urgell and Plaça de Catalunya.
The journey takes about 35 minutes and costs about €6 for a single ticket and €10 for a return ticket. Buses leave every 5 minutes at peak times. You can buy tickets on the bus or at the ticket machines at the airport. The buses are fully accessible and include a luggage section.

METROPOLITAN BUS
Transporte Metropolitano de Barcelona (TMB) regular bus route No. 46 runs from Terminals T1 and T2 to Plaça d’Espanya. The journey takes about 1 hour, since it makes a number of stops on the way. There is no luggage section and is not advisable if you are pushed for time. A single ticket costs about €2. You can also use the T-10 travel card.

NIGHT BUS
Don’t worry if you’ve got a very early morning flight. Mohn runs night buses to and from the airport: the N-16 goes to Terminal T1; the N-17 goes to Terminal T2. They both make several stops in Barcelona, including Plaça de Catalunya and Plaça d’Espanya. The journey by Nit Bus takes about 1 hour and buses leave every 20 minutes. They run from roughly 11 pm to 5 am, depending on the route. A single ticket costs about €2. You can also use the T-10 travel card.

Metro to and from Barcelona airport

The new L9 Sud metro line links Barcelona airport with El Prat, L’Hospitalet de Llobregat and Barcelona, where it connects with the Zona Universitària metro station. There are trains every 7 minutes and the journey takes about 30 minutes. The metro ticket to the airport is more expensive than a standard metro ticket: it costs €4.50. Standard single tickets and the T-10 travel card are not valid.

Taxi to and from Barcelona airport

If you decide to go by taxi, bear in mind that the minimum fare to or from the airport is €20. A journey to or from the city centre will cost around €30, depending on the traffic and time of day. There are taxi ranks outside both terminals.