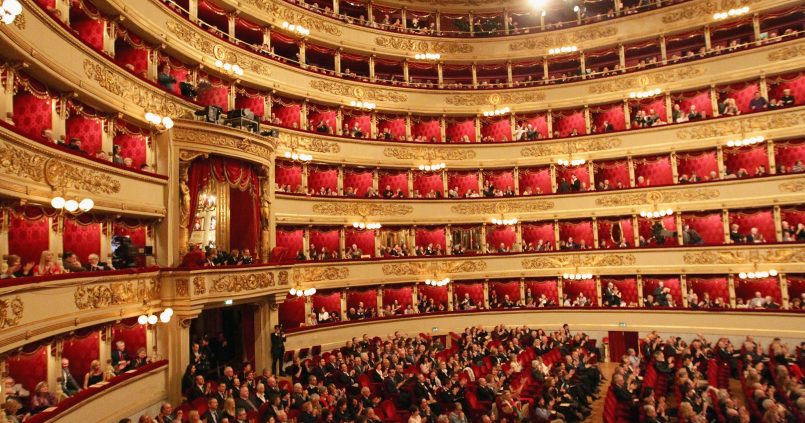 One of the sights in Milan you really mustn’t miss is La Scala Opera House, one of the most prestigious opera houses in the world, in the heart of the country that was the birthplace of opera.

After the original Teatro Ducale was destroyed by fire, architect Giuseppe Piermani drew up plans to rebuild it in 1776. The new theatre was built on the site of the church of Santa Maria alla Scala, which gave it its name. Two years later, it opened with Saliere’s opera Europa Riconosciuta.

The building has been renovated several times. It had to be repaired after suffering serious damage following the Milan bombings during the Second World War, and major, albeit controversial, renovations took place between 2002 and 2004, overseen by the famous Swiss architect Mario Botta. He enlarged the backstage and improved the dressing rooms, as well as restored 18th-century decorations and removed heavy carpets and paintings which had hidden the original marble. He also added monitors to allow audiences to follow libretti in different languages.

The building also houses a museum with the wardrobe from major productions and an extensive collection of paintings, photographs, sketches and statues linked to the world of opera.
Highlights include a plaster cast of Chopin’s hand, the spinet Verdi is said to have learned to play on, several batons used by Toscanini for performances at La Scala, Puccini’s death mask and a locket with a lock of Mozart’s hair.
Museum admission also includes a tour of the theatre’s vestibule and one of the boxes lined in red leather, with views of the auditorium.

See an Opera at La Scala

If you can treat yourself to a night at the opera in Milan, you’re in for a very special evening. On opening nights, women are expected to wear a dark evening dress and men should wear a jacket and tie. Dress requirements are more relaxed for other performances, although dressing up is all part of the glamour of the world of opera.

The season at La Scala gets under way on 7 December, Saint Ambrose’s Day, when the city celebrates its patron saint. Ticket prices vary depending on the performance and seat, but range from €20 to €500. You should book ahead online; La Scala is one of the world’s great opera houses and many performances sell out before the night in question.

Posted in Art and Museums in Milan, Milan
Marketing Team